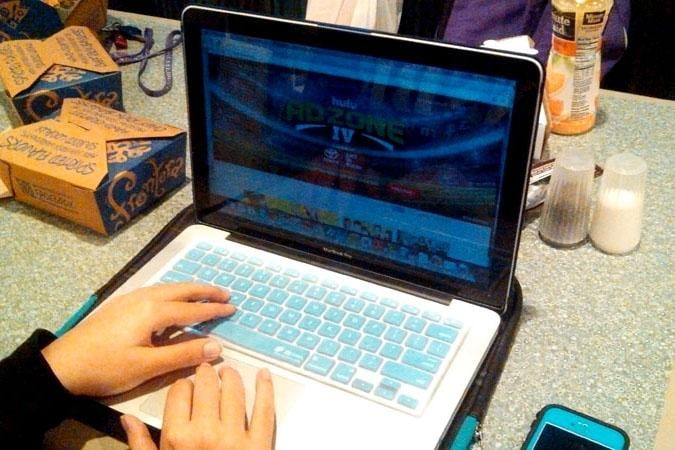 A student watches a video using Hulu Plus on her laptop. Northwestern Residential Services has given some students Hulu Plus accounts as a replacement for NUTV, which was discontinued over the summer. Ebony Calloway/The Daily Northwestern

Nearly 1,600 Northwestern students can now stream movies and television shows with free Hulu Plus accounts in a pilot program to test possible replacements for NUTV.

NUTV, a cable streaming service, was discontinued last summer and the University has been working to find an alternative. Hulu Plus accounts were distributed to students on Friday.

“The University is currently exploring a variety of options,” said Wendy Woodward, director of technology support services at Northwestern University Information Technology. “In reaching out to different services, Hulu was the one that at this stage expressed the most interest in a strategic relationship with Northwestern, so we’ve decided to proceed with a limited pilot as we evaluate their services.”

Anna Kottenstette, Associated Student Government vice president for student life, said ASG has been working with Residential Services on updating student entertainment options for about two years. She said she is glad the University is giving the issue attention.

“I think (students) will appreciate the fact that the University is looking out for this interest because a lot of the time we as students assume that the administration and faculty’s first priority is our academics and that entertainment and leisure fall to the wayside,” said Kottenstette, a former Daily staffer. “You can’t study all of the time, so having an outlet is really important.”

Riel said the University would have to gauge interest in the program and compatibility with the wireless network through the trial run before considering deployment to the rest of campus.

“We’ll be asking students for their feedback on it,” he said. “There’s no commitment on our part to go forward with this. We’re just piloting it first with our students to find out if there’s an interest.”

Kottenstette said she thinks Hulu Plus is an improvement over NUTV, which Riel said had a less than 10 percent usage rate when it was discontinued. Unlike the old service, Hulu Plus will not need students to plug into an ethernet port, she noted.

“You were physically bound to a cable and then you only got to watch what was actually on program at that time,” Kottenstette said.

Weinberg freshman Emmaline Rees, who lives in Shepard Residential College, said she has not used her Hulu Plus account yet because of midterms but is glad to have the option.

“It’s the middle of midterm season, and I know there are so many shows I want to watch,” Rees said. “It would definitely distract me, but I’m very thankful for it because they don’t offer cable in our rooms like they do in other schools.”