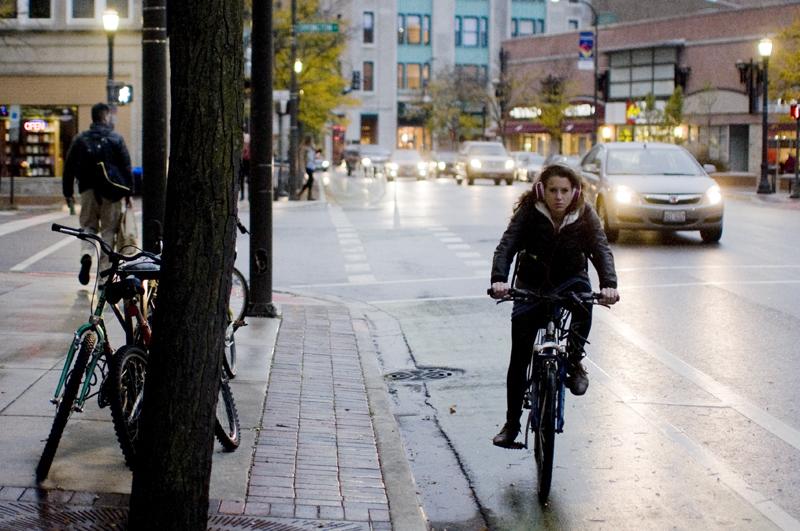 A cyclist bikes on Church Street in Evanston. A nearly 38-mile Evanston-Elgin bikeway will allow cyclists to travel from the Fox River Trail to Lake Michigan.

Evanston has constructed bike route segments that will become part of a bikeway from the city to Elgin, Ill., connecting 13 municipalities.

Once complete, the Evanston-Elgin Bikeway will be one of 16 regional corridors to connect communities in the northern and northwest suburbs. All corridors are currently in the planning phase, Dolin said.

About 22 miles of the 37.5-mile route currently exist, and funding exists for another 5.5 miles, said Mike Walczak, program manager for transportation of the Northwest Municipal Conference. The bikeway will connect to the North Shore Channel Trail parallel to McCormick Boulevard, and will also go to the Edens Expressway.

The Active Transportation Alliance worked with the Northwest Municipal Conference to develop plans for these corridors.

Walczak said the Evanston-Elgin Bikeway is a “high priority” corridor.

Evanston just finished constructing a route along Davis Street and is working on a Church Street path that will connect to Ridge Avenue. The path will continue from Dodge Avenue to McCormick Boulevard, the last piece of the Evanston bikeway to be constructed. The route will also go past Evanston Township High School.

“The Active Transportation Alliance is really looking forward to the completion of the bikeway,” Dolin said. “The city of Evanston has shown leadership in constructing this pathway.”

Different municipalities have constructed bike lanes or paths on segments of the route, but not all the segments have been connected yet. Construction has also not started for some segments.

Robinson cited the bikeway going through Golf Road and Morton Grove, Ill., as some challenges.

Though there is no estimated date for the bikeway’s completion, Elgin public works superintendent Colby Basham said he looks forward to using the route.

“As a bicyclist myself, I’d love to see some way to get from here to the lake,” Basham said.