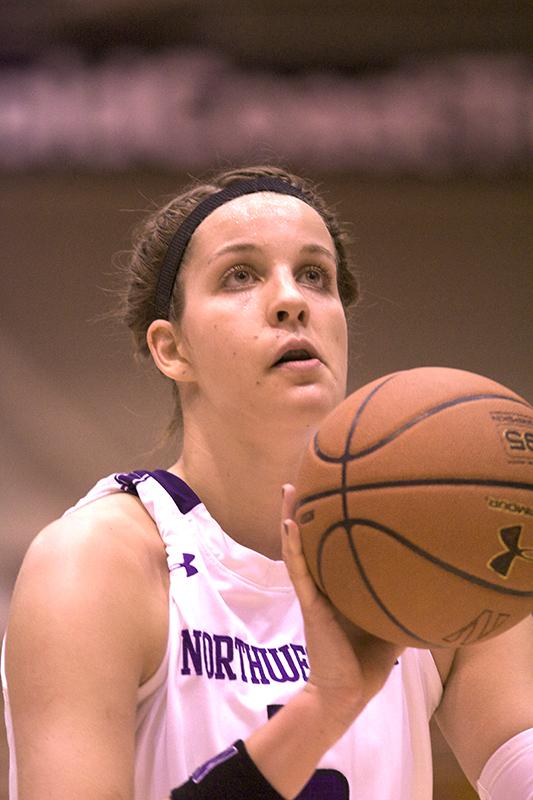 Junior Alex Cohen sets up for a free throw. Cohen helped anchor Northwestern against Penn State on Sunday and was on the court the whole game to come up with 18 points, four rebounds and five blocks.

Nia Coffey could only watch.

The freshman forward, who leads Northwestern in points per game with 15.4, was sidelined with a foot injury she sustained in the Wildcats’ last game against Indiana and looked on in a walking boot as NU (14-8, 4-5 Big Ten) fell to No. 12 Penn State  (17-4, 8-1) 79-75 at Welsh-Ryan Arena. It was the Cats’ third home loss this season.

“I think we can use this as a positive more than anything else,” coach Joe McKeown said. “Without Nia … I think everybody stepped up in her absence, I was proud of that. Nobody held their head. This team is pretty good at moving forward through adversity.”

The Nittany Lions led by as many as 20 points and had a comfortable 13-point cushion heading into halftime. The Cats stormed back in the second half to briefly take a 4-point lead with three minutes to play but couldn’t hold on as time expired.

“It was a great game, a great second half,” McKeown said. “I’m really proud of the effort of my team. … Just gotta finish that off, we had chances.”

Penn State guard Maggie Lucas, second in the Big Ten in scoring at 21.1 points per game, was as good as advertised, dominating the Cats with 19 points and six rebounds.

“We met her when she caught the ball, rather than giving her room and space,” McKeown said, “but she’s going to make tough shots.”

NU had to shuffle its lineup with Coffey sidelined. Sophomore forward Lauren Douglas started in Coffey’s place, and sophomore forwards Devon Brookshire and Christen Johnson, along with junior guard Karly Roser, all saw extended minutes. But despite the deeper rotation, the Cats didn’t get a single point off the bench.

Sophomore guard Maggie Lyon nearly singlehandedly kept the Cats in the game. After a slow first half in which she was just 1-for-5 from beyond the arc, Lyon exploded in the second half to finish with 26 points. She had the ball in her hands for NU’s final possession but drew considerable contact under the basket and couldn’t get to the rim.

“My teammates were finding me in good places,” Lyon said. “With a lot of people in foul trouble, I was trying to be more aggressive to the basket and fortunately some shots fell through.”

Junior forward Alex Cohen also stepped up with a big game in Coffey’s absence. The tallest player on the team — Cohen is listed at 6 foot 5 inches — has gotten inconsistent minutes this season, but played the entire game against Penn State and finished with 18 points, four rebounds, and five blocks.

“She’s played a lot as it is this year,” McKeown said. “I don’t see her role changing a whole lot. She’s giving us what she gives us.”

But even with Cohen’s uptick in production, NU still struggled on the boards, a problem that has plagued the team all season and was no doubt exacerbated by Coffey’s absence. The Cats were out-rebounded 47-28, including 19 offensive rebounds by the Nittany Lions.

“(Coffey) is a big asset on the rebounding,” Douglas said. “It’s been an issue all season.”

Besides Lyon and Cohen, freshman guard Ashley Deary continued her strong play at the point with 11 assists.

Ultimately, the deficit was just too big to overcome.

“It’s always disappointing to lose a game,” Douglas said, “especially like this when we were down so much. … But the things that messed us up are things we can fix.”