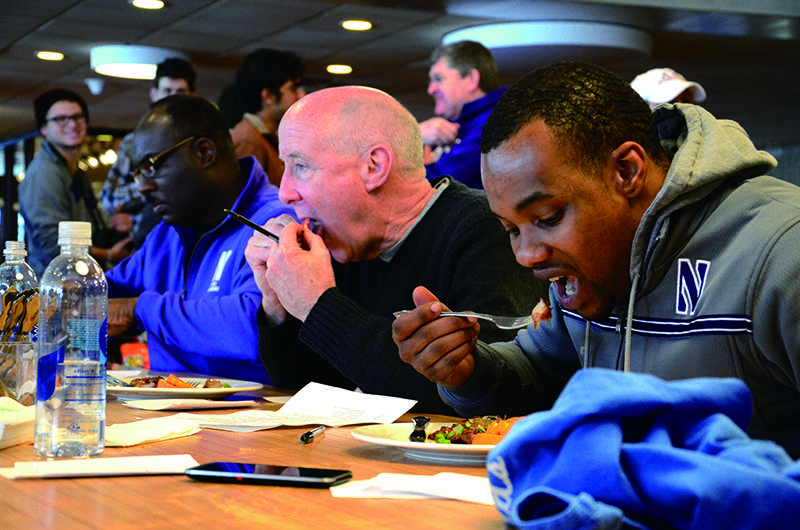 Teams battled for $1,000 on Saturday for Dance Marathon’s annual Top Chef contest. With Joseph Penrod, the namesake of Team Joseph, in attendance, 16 teams had 30 minutes to create a dish using the secret ingredient: the blood orange.

“It was really awesome,” said Tara Longardner, a member of the winning team. “Everybody on the A Phi and Sig Chi team works so hard so I’m really happy as a freshman to be able to contribute to that.”

Longardner, a Medill freshman, added it was particularly special to meet Joseph and his family.

“I love being able to see the people that you’re helping in person,” she said. “To see all the kids there running around and having a good time just made it mean so much more.”

“One, it is definitely a fundraiser because everyone that comes pays $5, but I think it’s also a great way to connect with the beneficiary and really start to connect the face to what we’re doing, and no event is better than over food,” the Weinberg senior said.

Blumberg said the event has become more popular in the last two years since moving to Norris University Center.

“We used to have it at an off-campus location and you could only take a bus one way so you’d have to stay for the whole three hours,” she said. “We get a lot more people coming here.”

Venric Mark, a senior running back for NU’s football team, served as one of the three judges at Top Chef. The other two judges were Burgwell Howard, assistant vice president for student engagement, and Steve Mangan, district manager for nuCuisine.

Mark said he enjoyed the variety of foods presented but said participants were having trouble implementing the secret ingredient.

“The difficulty of using the blood orange is actually trying to implement that into the food,” he said. “A lot of people just cut up the orange and will put it on top when it maybe should have been blended into a sauce and put on top of the dish.”

Mark added that the event was a good opportunity to give back.

“Helping other people besides yourself, that’s something Coach Fitz always teaches us,” he said.