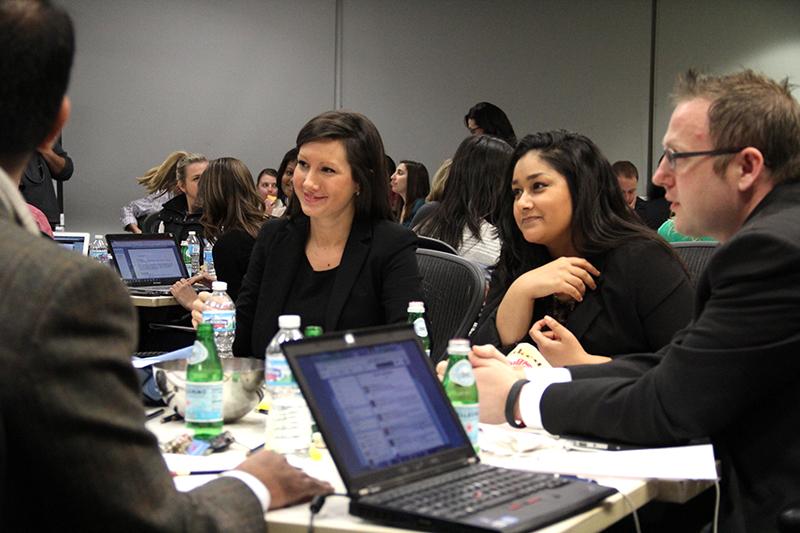 A panel of MBA students from the Kellogg School of Management evaluate Super Bowl advertisements Sunday night at the Allen Center. The business school also celebrated its 10th year holding its Kellogg Super Bowl Advertising Review, which aims to identify which ads were the most effective.

While most viewers focused their attention on the football game during Sunday’s Super Bowl, about 50 Kellogg students at the Allen Center waited for what played during the commercial breaks.

Microsoft scored the highest marks for its “Empowering” ad in the 10th annual Kellogg Super Bowl Advertising Review, where MBA students rated each advertisement for its marketing effectiveness while the Seattle Seahawks faced off against the Denver Broncos.

“Microsoft not only led the ranking, it also embodied the inspirational tone of many of the ads this year,” Kellogg Prof. Tim Calkins said in a news release. “This sentiment also was reflected in the Cheerios and Heinz ads, both of which elicited the basic good feelings consumers associate with the brands.”

Derek Rucker, Kellogg professor and co-director of the review, said the purpose of the event was to give students an opportunity to apply the advertising lessons they learn in the classroom to real-world scenarios.

“At Kellogg, we want to give students experiential learning lessons,” Rucker said. “What better place to use advertising lessons than to look at Super Bowl ads?”

During the commercial breaks, the students sat quietly, scoring each commercial strategically. While the game was on, they chatted about each of the advertisements.

Rucker said the students use a strategic framework to rate the commercials, including how well the spot captures the viewer’s attention, how distinct it is and how well it links back to the brand.

“Everywhere I looked, every screen I looked at, there was a commercial playing or some kind of preview,” he said. “But I’m glad I didn’t, because I think it’s a little less diluted to actually see it for the first time during the game.”

Kellogg students Screwvala and Stephanie Cadieux agreed that the panel was important both from the standpoint of the companies advertising and the students rating the ads.

“It’s a meeting point of academia and the real world,” Screwvala said, noting the rankings hold weight with advertisers because the companies hire a lot of Kellogg alumni.

Cadieux said it was important for students interested in advertising to come together and evaluate the ads.

“As students, we are coming in very unbiased. We’re not basing our rankings on popularity,”  Cadieux said. “We’re really basing it on strategy.”