Wrestling: Northwestern falls to top-ranked Iowa, McMullan poised to move up in standings after second No. 1 takedown 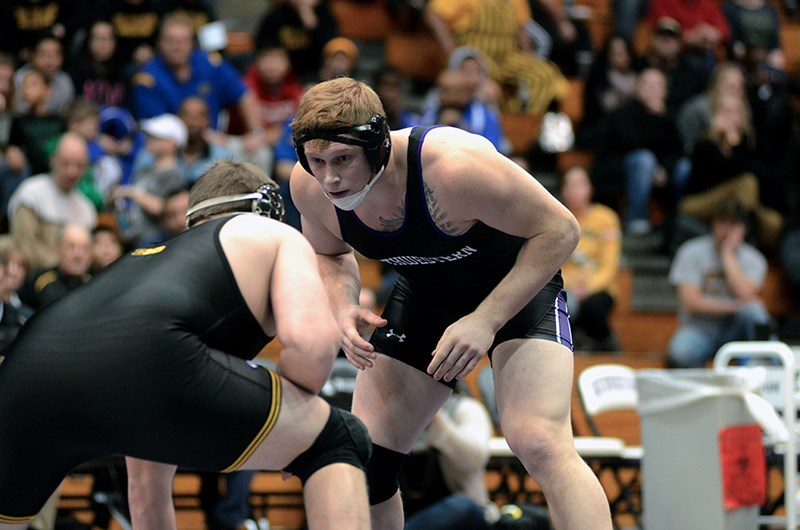 Junior heavyweight and No.3 Mike McMullan takes on No.1 Bobby Telford of Iowa. McMullan defeated Telford, the second No. 1 the junior has beat this season, in sudden victory Friday.

The Cats followed a similar script, dropping bouts at 125, 133 and 141 pounds for the fourth straight match.

Junior Pat Greco did not capitalize against No. 9 Josh Dziewa at 141 pounds, taking the high-ranking Hawkeye into three overtimes but losing 5-4.

No. 4 Jason Tsirtsis at 149 pounds tallied the Cats’ first points with a 5-2 decision against No. 12 Brody Grothus. The redshirt freshman’s early 3-0 lead was cut to one point, but his takedown of Grothus sealed his victory.

NU lost its next five bouts, including one by forfeit.

Two-time All-American Mike McMullan, ranked the third-best heavyweight nationally, ended the affair with an upset of No. 1 Bobby Telford. It was the second time this season McMullan defeated a top-ranked heavyweight.

McMullan and Telford went into overtime tied 1-1. McMullan achieved his victory with a takedown, just as he did in overtime against then-No. 1 and reigning NCAA champ Tony Nelson on Jan. 10.

McMullan said defeating Nelson was a “huge confidence builder,” and he thought the experience from three weeks ago helped him on the mat Friday.

Michigan freshman Adam Coon started the week ahead of McMullan, but McMullan could grab the No. 1 spot in next week’s rankings.

McMullan said he believes he is the best heavyweight but does not care where rankers place him.

“If those rankers don’t want to rank him (No.) 1, then they have problems,” Pariano said. “Let’s bring Coon over from Michigan. I’ll drive him down here. We’ll have a wrestle-off because I know how that result would go.”