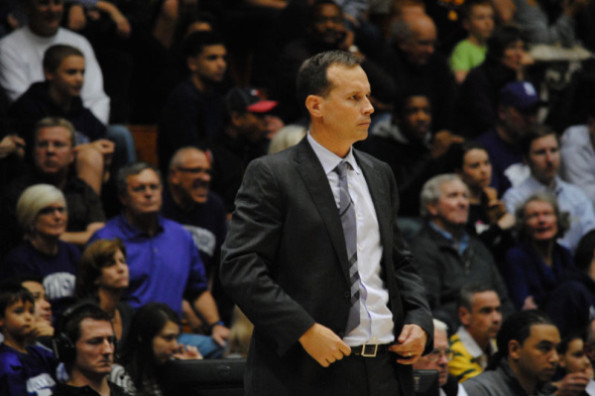 Northwestern coach Chris Collins watches a game earlier this season. Collins has spearheaded a turnaround in his first season in Evanston, with the Wildcats in sole possession of fourth place in the Big Ten.

Northwestern (12-11, 5-5 Big Ten) moved into sole possession of fourth place in the Big Ten on Saturday with a down-to-the-wire 55-54 win over Minnesota (15-7, 4-5). The Wildcats’ third straight road win in the Big Ten gave them their longest conference win streak away from Evanston since the 1959-60 season.

“The guys are so resilient. It was tough week,” coach Chris Collins told BTN after the game. “We had one day prep to play these guys. We made some shots when we needed to. We’re winning with our defense and toughness.”

Saturday’s game was not decided until the final minute.

With the shot clock winding down and the game tied at 52, sophomore guard Tre Demps hit a 3-pointer to put NU ahead 55-52 with under a minute to go. Minnesota answered on its next trip down the court with a layup to bring the game within a point.

After the Cats failed to score on their next possession, the Golden Gophers had just over 11 seconds left for a game-winning shot.

Senior forward Nikola Cerina helped stop a layup at the rim, and a scramble ensued in the final seconds, with Minnesota missing one more layup before time finally expired. Golden Gophers’ coach Richard Pitino stormed on the court looking for a foul call.

“We made plays down the stretch. They missed a couple shots at the end. Sometimes you need that,” Collins told WGN Radio after the game. “What can you say about Tre Demps? He made a huge shot when we needed it.”

Early on, it looked like the Cats were ready to upend the Golden Gophers in the first half.

NU ran out of the gates with the same hot shooting that contributed to a win against Wisconsin. Junior guard JerShon Cobb especially had it going, hitting multiple 3s as the Cats jumped out to a 21-11 lead 10 minutes in.

But the Golden Gophers fought back. After senior forward Drew Crawford left midway through the first half with two fouls, Minnesota went on 16-2 run to take a 27-23 lead. When Crawford returned, NU regained its composure, going on a 9-2 run of its own to take a 32-29 lead at the half.

“They hit us with a big run after Drew picked up his second foul,” Collins said. “After, this just became one of those possession by possession games.”

Minnesota’s scouting report on the Cats was clearly up to date. Throughout the game, Minnesota pressured NU in the backcourt, forcing ballhandlers to make quick decisions and avoid turnovers.

The Cats struggled mightily with the press in their last game against the Badgers, just as they have in most other situations this season. Saturday’s effort, though up and down, was much better.

At times, crisp passing helped break down the defense, such as in the first half when a quick dismantling of the press led to a Crawford 3. Other times, the results were disastrous, such as in the second half, when Cerina ran the ball down the floor into a triple team and turned it over.

Overall, Collins was satisfied with the improvement, praising Cobb for handling the pressure well for most of the game. NU finished with only nine turnovers despite facing defense in the backcourt on many possessions.

Crawford added the team’s trust in one another has helped the Cats obstacles.

“(The win) feels great because of the brotherhood we have.” Crawford said. “A lot of these games are going to be grind-it-out games. They pressed us the whole game. For us to band together and get the win is great.”

“Every team you play in this league is so good,” Collins said. “To win three straight games on the road, it’s really about the guys. The guys in our locker room said we wanted to make something of this season, and they have. I’m proud to be their coach.”