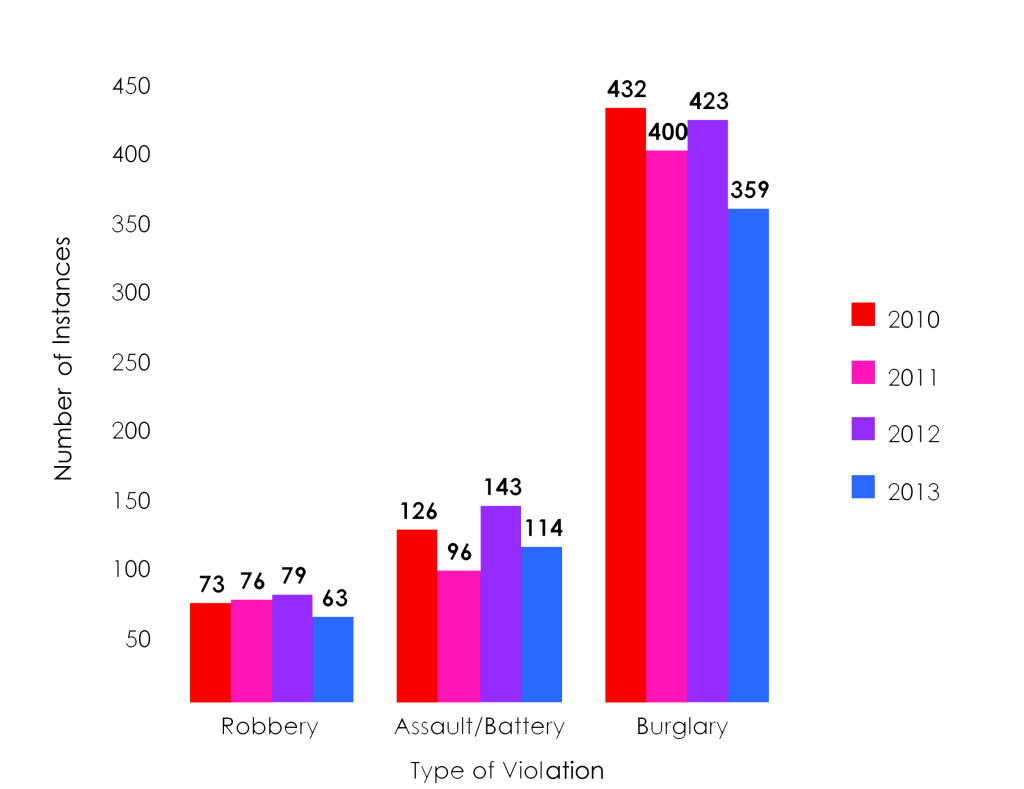 Crime in Evanston fell nearly 10 percent in 2013 compared to the previous year, according to police data.

Evanston Police Cmdr. Jay Parrott presented the department’s 2013 crime report Monday to the City Council. The overall drop of 9.8 percent came with double-digit declines in robbery, burglary and aggravated battery. The reduction is the most significant Evanston has seen since 2010, Parrott said.

In addition to the drop in overall and violent crime, Police Chief Richard Eddington drew attention to the department’s clearance rate for the shooting deaths in 2013. Police have cleared all four deaths that were ruled a homicide. EPD considers a case to be “cleared” if it has collected enough evidence to show a person is more likely than not an offender, Parrott said. A case can be cleared without the arrest of the person of interest.

Arrests have been made in Evanston’s two most recent slayings.

The department’s clearance rate for 2012 deaths was a source of community tension last year, when some community members criticized police for failing to solve homicides in the city. During a community meeting in April, families of victims expressed their frustration with Evanston police. An anonymous question submitted to police during the meeting asked, “Why does it feel as if the EPD could care less about solving a murder or keeping in contact with the families?”

Last year’s improved clearance rate, however, has not fully repaired relations between police and the community. The Hakeem family has consistently criticized the way police have conducted the investigation into the brothers’ deaths. After police identified Ross as a person of interest, Farheen Hakeem, sister of Azim and Mobeen, said she doubted the validity of the department’s claims.

“Our family will continue to be vocal of how this investigation has been conducted poorly,” Farheen Hakeem said in a news release.

Carolyn Murray, mother of slain 19-year-old Justin Murray has also voiced frustration with the investigation into her son’s death. Justin was gunned down in November 2012.

Although relations with victims’ families remain tense, police have increased their general outreach in the community, with increased communication initiatives and a mentoring program with teens at Evanston Township High School, 1600 Dodge Ave., which Parrott discussed Monday. He cited this as one of the reasons for the crime drop.

“The public is more involved and the police department is more engaged with the community,” Parrott said.