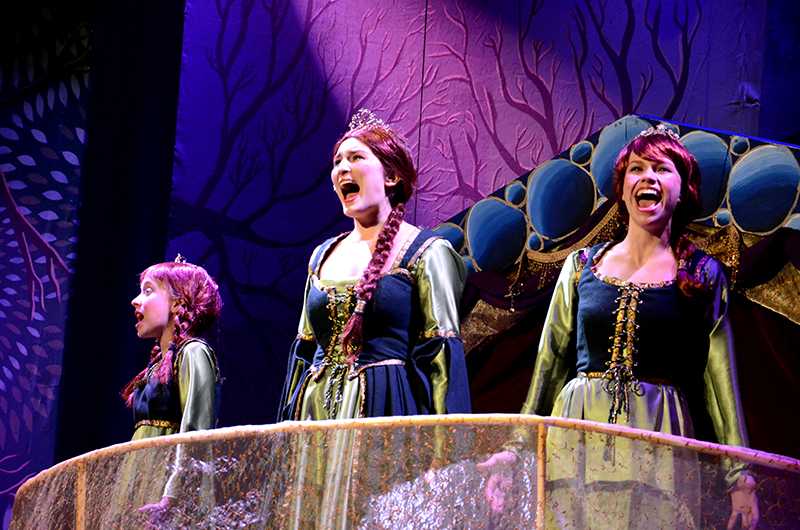 The 72nd Dolphin Show, “Shrek the Musical,” opened over the weekend with a slight drop in ticket sales from last year’s show.

Ticket sales for opening weekend, which included evening performances on Friday and Saturday and a Sunday matinee, totaled 1,972. Sales for last year’s “My Fair Lady” totaled 2,037, said Rachel Marchant, the show’s executive business producer. However, both shows sold out the Saturday night performance.

“I definitely think that our Greek night promotion was very successful,” the Communication senior said. “We have groups from over 15 fraternities and sororities.  I think that contributed both this year and last year. We love to see people who are not just theater majors.”

Marchant attributed the decrease in ticket sales to troubles they encountered due to unusually bad weather.

“Normally we do a lot of advertisements with flyers and banners outside, but this year the grounds were wet,” Marchant said. “With ‘My Fair Lady,’ we could do that, but this year we could not get that kind of exposure.”

The show implemented a new pricing system this year where the prices were higher for certain tiers and lower for others with students receiving a $10 discount on all tiers. Without the student discount, prices ranged from $15 to $30. Last year, general tickets cost $25 while students paid $10.

“It’s possible that this new pricing structure caused some hesitance for the student population,” Marchant said. “However, we’re hoping that this pricing structure improves our revenue per ticket sold while allowing more price flexibility for students and families who desire a more affordable way to see the Dolphin Show.”

Weinberg junior Katie Shanagher said she does not go see musical theater much, but she really enjoyed seeing this year’s show Saturday night with her sorority sisters.

“I liked seeing a movie that I knew really well in play form,” she said.

Weinberg junior Erin Anderson, a self-described “big musical theater person,” said although she was impressed with the students’ acting, she questioned the choice of “Shrek” as the show.

“I get why they wanted to do something more fun and lighthearted,” she said. “But I’m a sucker for the classics.”

“This show had more stand-out moments that made me laugh than ‘My Fair Lady,’” she said. “I thought Chanse McCrary did a phenomenal job as Donkey. Every time he was on stage, he made me smile.”

Anderson said she also liked the trio of Fionas and the cast’s rendition of “I’m a Believer” at the end.

Marchant said she hopes to match the ticket sales from last year, which were the highest in Dolphin Show history, and to reach a wide audience with “Shrek.”