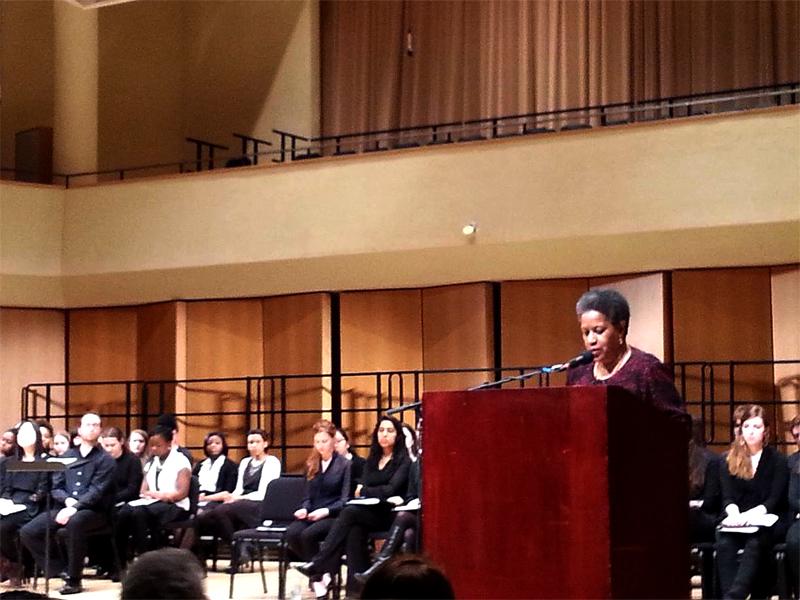 To end a week of commemoration for Martin Luther King Jr., civil rights activist and author Myrlie Evers-Williams delivered a keynote address Monday, stressing the importance of King’s legacy and commenting on progress that still needs to be made.

Evers-Williams, who was the first female chair of the National Association for the Advancement of Colored People from 1995 to 1998,  spoke Monday evening before hundreds of students and community members at Pick-Staiger Concert Hall.

Her late husband, Medgar Evers, was also active in the civil rights movement. Both coordinated demonstrations and voter registration drives before Evers was assassinated by a member of the Klu Klux Klan.

“All has not been smooth,” Evers-Williams said. “There’s politics in each and every thing we do. When the cause is great enough, it is the need and time for us to come together to lead a country that believes in hope, faith, trust, in humankind, and believe that in working together, we can change the betterment for all of us.”

The MLK Day Planning Committee chose Evers-Williams as the keynote speaker because of her and her family’s involvement in the civil rights movement.

“I just think it was an opportunity to reflect on how can we move forward in civil rights,” said Dona Cordero, assistant provost for diversity and inclusion and chair of the committee.

“How’s Evanston doing?” Tisdahl said. “Well, we can vote and we never stop trying hard to strive for equal opportunity. We want everyone to be part of our community. Why do I say we’re not doing well? We’re losing members of our African American community, people who have been here for generations. Many can’t afford to live here.”

During her speech, Evers-Williams thanked Tisdahl for her honest remarks and discussed how Americans need to honestly evaluate how far they have come in terms of racism after 50 years. There is still much progress that needs to be made, she said, not only in fighting racism but also in issues such as gun violence.

“If you’re going to be in any way honest, we still have so much to do since Dr. King spoke about his dream,” Evers-Williams said.

Evers-Williams stressed the importance of carrying on King’s legacy.

“The idea of respect is still as beautiful and as strong today as it ever has been,” she said. “Martin Luther King, Jr. will forever live in the memory and the hearts of people in America and throughout the world.”

Evers-Williams’ and her husband’s work also made them targets of hate crimes. Because of Evers’ organized boycott of white business owners in Jackson, Miss., their home was firebombed in 1962.  The following year, Evers was assassinated by Byron De La Beckwith, a Klansman from Mississippi. De La Beckwith was not convicted of murder until 1994.

“I often wonder, how does it feel to know that your life may be taken from you any moment, and you believe strongly enough to keep speaking out and keep working?” Evers-Williams said. “Dr. King found battles every way he turned.”

Despite the loss of her husband, Evers-Williams remained active in the civil rights movement. After her term as NAACP chairperson ended, she started the Medgar & Myrlie Evers Institute in order to promote training, education and economic development.

“I enjoyed her speech a lot,” McCormick senior Jeremiah Edwards said. “In comparison to other years, maybe because of the cold weather, it was disappointing to see the attendance numbers, but I really enjoyed her message of fighting for something she believes in.”

After the speech, Medill junior Ashleigh Nelson conducted an interview with Evers-Williams. NCE and Alice Millar Chapel Choir performed musical selections at the end of the event. University chaplain Timothy Stevens also did a benediction.

“It’s one thing to remember, but it’s another dimension to remember and do something beyond that,” Cordero said.