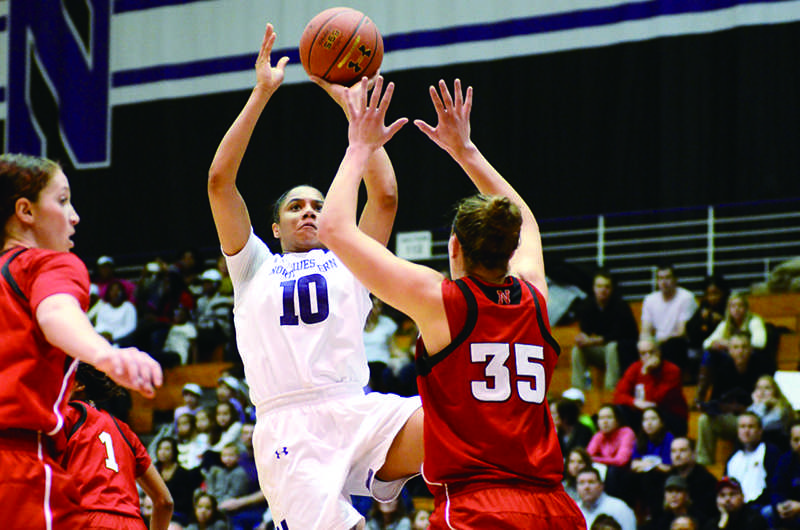 Freshman forward Nia Coffey lofts a fadeaway jumper over a Nebraska defender. The rookie sensation led Northwestern with 22 points and 10 rebounds in the Wildcats’ 63-59 victory.

At a passing glance, Northwestern was outplayed by No. 21 Nebraska on Sunday afternoon.

Especially during the game’s first half, the Cornhuskers’ hands were a little more careful than the Wildcats’ were. Their plays ran a little sharper and their defense moved a little more quickly. But shooting, intangibles and the last two minutes of the game made all the difference, paving the way for NU’s (13-7, 3-4 Big Ten) 63-59 win against Nebraska (13-5, 3-3).

Sunday’s contest at Welsh-Ryan Arena was the second close game of the season between the conference rivals — the Cornhuskers edged the Cats 66-65 earlier this season in Lincoln, Neb.

The second time around was equally neck-and-neck, with the lead bouncing back and forth all afternoon.

Coach Joe McKeown joked his team should take the week off more often — NU played Purdue on Thursday but had not played before that since Saturday, Jan. 18.

“Nebraska’s a legitimate top-20 team and I think we had a little extra in our tank,” McKeown said. “I think our team felt like after the game in Lincoln. … We felt like we could go toe to toe with them.”

The Cats led the Cornhuskers in shooting percentage for almost the entire contest and ended the game with 39 percent field goal average, compared to Nebraska’s 32.3 percent.

NU also notably outshot the Cornhuskers from beyond the arc, ending with a 41.2 percent average against Nebraska’s 29.4 percent.

But it was the last two minutes of game — the most exciting of the entire scrappy contest — that was NU’s saving grace.

The Cats went on a 9-4 run with two minutes left before the final buzzer. Freshman guard Ashley Deary kicked off NU’s streak with a 3-pointer, her second of the night. From there, sophomore guard Maggie Lyon made a layup, freshman guard Christen Inman stole the ball from Nebraska and then sunk a 3 and junior forward Alex Cohen came up with a huge block.

“I was wide open, and I guess I had to shoot it. My teammates had confidence in me to knock it down,” Deary said. “It was definitely a team effort, the last two minutes.”

Freshman forward Nia Coffey and Deary were once again critical elements to the Cats’ success. Coffey was all over the court and drove NU’s scrappy transition play. Coffey ended the night with 22 points, 10 rebounds and four steals, the team leader in all three categories.

The forward was also largely responsible for holding Nebraska’s Jordan Hooper, who ranks third in the Big Ten in scoring and second in rebounding, to 11 points and eight rebounds.

Deary was a commanding point guard as usual, and Inman hit her big shots when NU needed them most. Deary ended the game with 10 points and Inman racked up 12 of her own.

Despite the feisty win for the Cats, the question at the end of the game was about the team’s consistency.

NU has had bright moments this season in wins over then-No. 21 Purdue and Wisconsin. Still, Coffey and Deary said playing better team basketball should help in blowout losses such as the 25-point loss the team suffered against Purdue on Thursday.

But it is better rebounding, the freshmen said, which will help the Cats be more assertive in close games like Sunday’s. The Cornhuskers snagged 47 rebounds compared to the Cats’ 39.

McKeown also acknowledged the team’s struggle with consistency, but couldn’t complain about a close win or the confidence boost that comes with it.

“We just needed a win like this,” McKeown said. “This is our third or fourth win over a top-20 team this year, so it shows us how good we can be. But we also know we can’t play in spurts.”