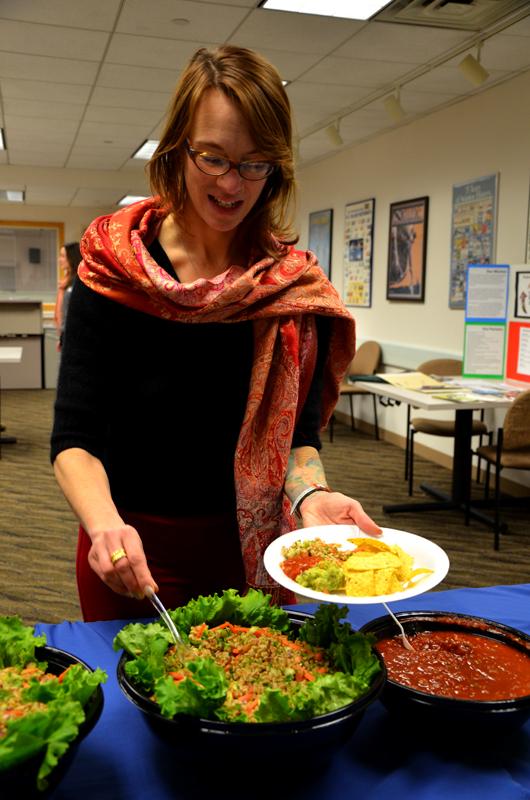 Northwestern University staff member A.C. Racette helps herself to food at an NU Sustainable Food Talk. The event included a potluck and panel about the business of good food sourcing.

Northwestern students and community members gathered Thursday night for the first NU Sustainable Food Talk of 2014, where a panel of experts discussed an initiative to increase commercial use of locally grown crops.

NU Sustainable Food Talks was founded by students who wanted to inform the community about various topics pertaining to the environmental impact of food. The group holds open discussions about once a month, bringing in experts to talk about topics ranging from genetically-modified crops to school nutrition.

Thursday’s panel, held at Chambers Hall, 600 Foster St., discussed food hubs, organizations that gather locally grown crops and act as the middlemen when selling them to commercial wholesalers. Three executives from different food hubs led the talk. They discussed the current problems local farmers face, how food hubs make things easier for them and the direction of local farming in Illinois.

A very small portion of the food consumed in Illinois comes from local farms, said Jim Slama, president of Familyfarmed.org.

“Illinois is a $50 billion food market, and my guess is less than 2 percent is grown locally,” Slama said.

Currently, the most common way that farmers sell their crops is through farmers’ markets. About 8,000 active farmers’ markets operate throughout the United States. Though they are a great way to get produce directly to the consumer, the markets are often a hassle for farmers who usually have to give up entire days to go into town and sell their product. This reduces the number of days they could otherwise be farming, panelists said.

Instead of selling in markets, farmers find it easier and more profitable to sell their crops wholesale to large restaurant or grocery chains, panelists said. Food hubs are the ones who coordinate this transaction, connecting farmers to wholesale buyers.

Local Foods, an area food hub, services between 50 and 200 farmers across Illinois, Iowa, Indiana, Michigan and Wisconsin. These local farmers own anywhere between 1 acre to 500 acres of land. Most cropland in the United States is occupied by more than 1,100-acre farms, according to the U.S. Department of Agriculture.

Because it is difficult for small time growers to compete with the larger farms, many nationwide initiatives promote buying locally grown produce. The experts explained ways students could support local farms without ever leaving campus.

“Students can encourage Northwestern to try more organic, locally grown food in their menu. Ask restaurants if they buy locally. If they don’t, tell them you’d come there more if they did,” said Andrew Lutsey, CEO of Local Foods.

Tiffany Leighton Ozmina, founder of NU Sustainable Food Talks, was pleased with how the discussion went.

“I think it was a good overview of food hubs without getting too technical,” Ozmina said.