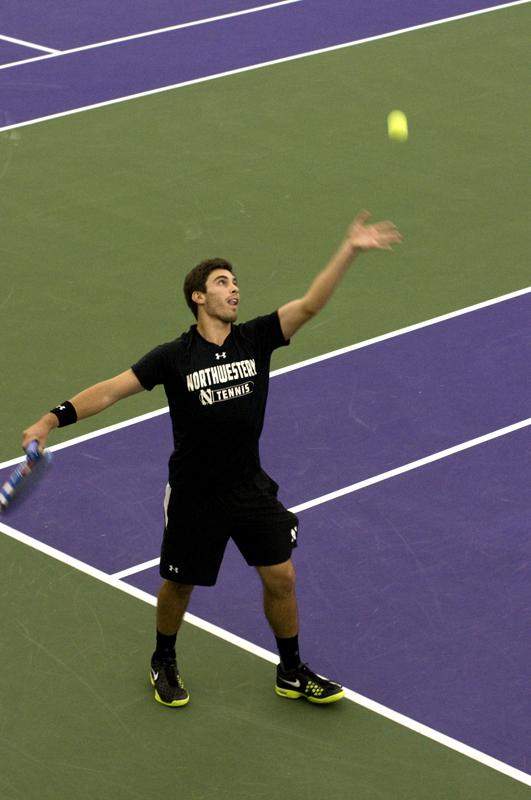 Senior Raleigh Smith, who was benched because of a Fall Quarter injury, sets up a serve. Smith was able to take down No. 54 Andy Bettles at Boise last Friday, and he is eager for the team to prove itself in Oklahoma this weekend.

Northwestern’s opening road match of the dual season took the team to Boise last weekend, a place which offered a fierce environment and a top-50 opponent. But this weekend’s slate of contests could be a challenge of a higher order.

The No. 31 Cats will get their road fix again out west on Saturday, this time for the ITA Indoor Qualifying Rounds in Norman, Okla. The tournament is split up into 15 regions, each of which contains four teams. Within each region, the teams compete in dual-match play, with the victors of the opening two matches meeting in the finals. Whoever triumphs in that contest wins the region and earns itself a berth in the ITA Division I National Men’s Team Indoor Championship next month.

Sounds easy enough. But in order to win its region, NU will need to piece together a pair of spectacular performances.

The Cats’ first match will be a Saturday affair against No. 24 Tulsa. The Golden Hurricane started off the year 4-0, barely breaking a sweat in the process. Despite playing then-No. 30 Drake and then-No. 61 Wichita State in that span, Tulsa has not lost more than 1 point in any match. They also boast a striking one-two punch in Japie De Klerk  and No. 71 Carlos Bautista.

Coach Arvid Swan is hardly ignorant of what his squad is up against.

“(Tulsa) is a top-20 team, they’ll finish top-20 this year,” Swan said. “The level of play we’ll need is very high in both doubles and singles. We’re just going to have to play at a higher level than we have this year thus far.”

The other two teams in NU’s region are No. 37 Virginia Tech and No. 9 Oklahoma. If the Cats fall to Tulsa, they will play the loser of Hokies-Sooners in a consolation contest. A victory means a spot against the winner of the other match and a chance to advance to nationals.

NU has looked good in their first three matches of the season. Senior Raleigh Smith, after slogging through a Fall Quarter he deemed “frustrating” due to an injury sidelining him from action, relished an opportunity to take down No. 54 Andy Bettles in Boise, which he did in straight sets. Freshman Strong Kirchheimer has not lost more than two games in a set in singles play. And last year’s doubles woes have subsided for now, as the Cats narrowly lost out on that point in Boise and won it in their next two matches.

In order to notch a pair of wins this weekend, though, the team needs to get the most out of its capabilities, something it has yet to do. Certain players lapse in singles at times, and doubles is still a work in progress. Sophomore Mihir Kumar admitted the latter is an area he wishes to improve.

“I want to play a lot better in doubles,” Kumar said. “That’s one thing I haven’t been doing as well, so I want to pick that up. We just have to keep putting in the hours, just keep working hard in practice. It’s definitely a big weekend coming up.”

The Cats have barely had time to wade their feet in the water and will face two top-50 opponents in their first five matches  following this weekend.

It doesn’t get any easier with a trip to No. 15 Vanderbilt next weekend. But that’s just the way the coach likes it.

“You have to get quality wins if you want to make the NCAA tournament, so you try to play quality opponents,” Swan said. “This weekend is just par for the course.”

As a senior, Smith has seen the women’s squad advance to nationals the last three years. In his final year, he hopes the men can join in as well.

“It’d be huge,” Smith said. “All the best teams get to that final 16. The girls always do it, so obviously we win that first match and we give ourselves a chance to win the rest. But Tulsa’s going to be tough, so we’re focused on them first.”