Men’s Basketball: Northwestern matchup against Iowa to be clash of technique 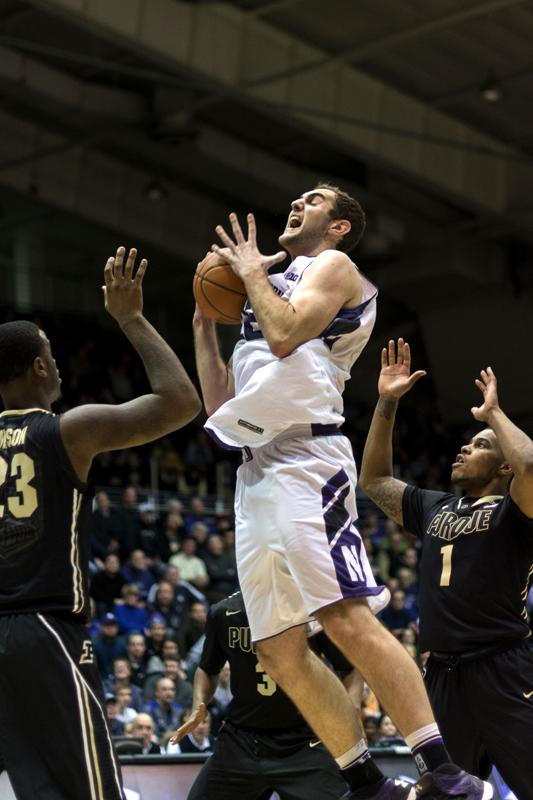 Sophomore center Alex Olah, pictured snagging a rebound in Tuesday’s win against Purdue, has been an important cog in Collins’ new defensive machine. Olah averages more than five rebounds per game and leads the team in blocks with 38 so far this season.

First, it was a 76-49 drubbing at the hands of Wisconsin. Then came an eerily similar 74-51 defeat at Michigan.

The Wildcats’ gut-check game happened in their third contest, a 93-67 setback against the Iowa Hawkeyes. After that game, coach Chris Collins vowed to change his team’s style to avoid another big loss.

“When I first started, my main goal this year was to make us a scrappy, hard-nosed, blue-collar team that fights. We do that,” Collins said after Tuesday’s win over Purdue. “We’ve now done it for four straight games and that’s not going to change. We may not win (every game). But I promise these guys are going to fight, and I’m really proud to be their coach.”

The story goes that Collins adopted this blue-collar style after the loss to the Hawkeyes, transitioning his team to a defensive squad to reduce the number of possessions and keep his team close. The result has been a renaissance in the middle of conference play, albeit against lesser competition.

After the Cats gave up more than 70 points in each of their first three Big Ten contests, the most an opponent has scored since is 60, and that point total required two overtimes. NU held two opponents under 50 points, and hung close with No. 4 Michigan State into the second half of that game.

“From the start, coach Collins wanted us to be a blue-collar team, a team that fights,” senior forward Drew Crawford said Tuesday about the change from the beginning of the season to now. “That was something that we struggled with early. We couldn’t do it for the whole game. The key for us has been fighting for the whole game.”

Offense, however, remains another story. Though Collins has found a technique that fits his team, he’s yet to find anything that can get the ball in the hoop — the Cats are consistently bad at shooting.

In its last four games, NU hasn’t shot the ball more than 40 percent in any contest. The Cats’ best effort was a 37.3 percent night against Indiana. Against Michigan State, the offense was at its ugliest, when NU hit just over 28 percent of its field goals.

Surprisingly, the Cats’ offensive performance in their loss to Iowa earlier in the season was also their best shooting night in the last five games, when they converted at a 39 percent clip.

The problem was defense.

NU not only struggled covering the three-point line but also had trouble defending the paint. Iowa’s starting frontcourt combined for 44 points in the teams’ first meeting.

Saturday’s game will also be a clash of styles.  The Cats’ slow, lumbering offense and tough defense will be matched with the Hawkeyes’ fast-paced attack. Ultimately, the game should serve as a benchmark to see how effective Collins’ adjustment has been since the teams’ first matchup.

“It’s not pretty, we know that,” Collins said Tuesday. “But as long as we can find a way to get the job done, it doesn’t matter.”