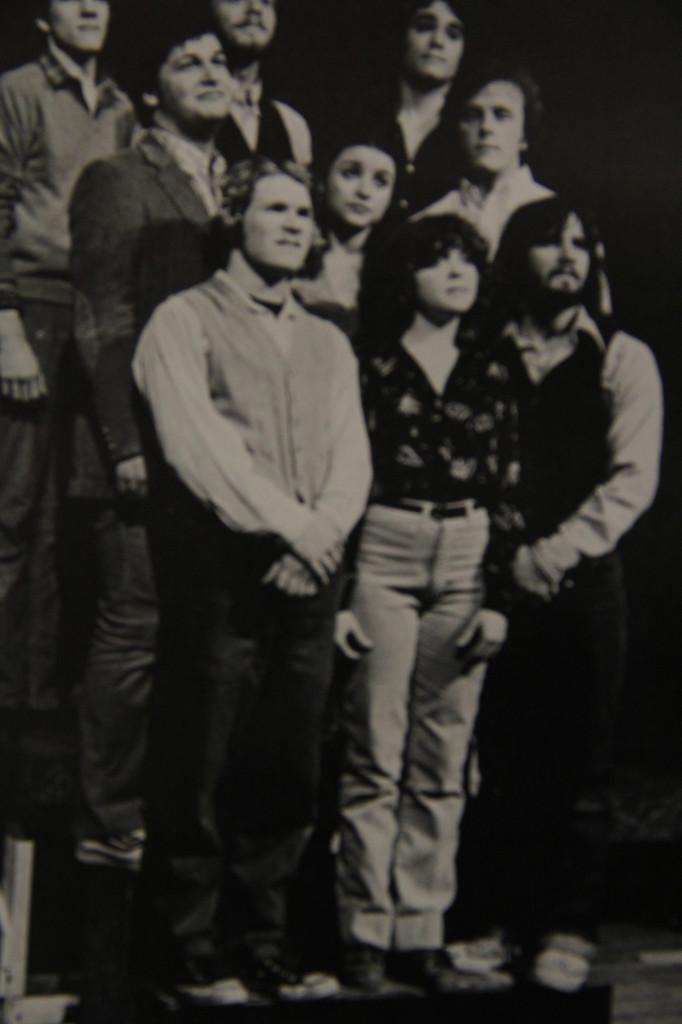 In front of a small brick garage on a Saturday morning, eight students trudge through the snow with trays of purple paint. Large wooden boards lay on a tarp. Music blasts from the inside of the garage as students paint the boards and try to ignore the winter breeze.

“Everyone is so quick-witted,” said Gaby FeBland, a Communication senior and Mee-Ow member. “Everyone knows how to listen. I love how everyone’s on stage for every improv game. I love the games we play. Your whole team is literally supporting you.”

Mee-Ow puts on two Winter Quarter shows. Members also hope to do an improv show in the spring, as they did last year. Its upcoming show, titled “You’re Invited to Mee-Owy Kate and Ashley’s Sleepover Party” will hit the stage at 10 p.m. Thursday, 8 and 11 p.m. Friday and 8 and 11 p.m. Saturday at Shanley Pavilion.

Unlike other improv groups on campus, Mee-Ow focuses on short form, which usually lasts less than three minutes. Performers also play improv games on stage. Long form improv often lasts up to 30 minutes. Students in Mee-Ow also write comedy sketches that last between two and four minutes, and a rock and roll band performs during the shows.

“If you have a joke (in long-form improv), you have to hold on and let it develop,” said Pat Buetow, a Communication senior and Mee-Ow member. “This is boom, bam, let it go.”

Buetow also said the show has more interaction with the audience, who can offer suggestions and dance on stage.

“You’re getting on stage in front of hordes of drunken humanity, and you have to trust your instinct,” FeBland said.

Paul Warshauer and Josh Lazar co-founded Mee-Ow in 1974. They came up with the idea a year earlier, when Lazar (Weinberg ’75) wanted to “kick Waa-Mu’s ass.” Lazar believed the Waa-Mu Show butchered the material he had submitted, and they decided to create a new show called “Mee-Ow,” a reference to the Wildcats and a parody of Waa-Mu.

Mee-Ow did its first show in 1974 in the McCormick Auditorium. The show included sketch comedy, poetry and dance. At the time, Mee-Ow had a cast of about 30 students.

“It taught me to be a director and a producer,” said Warshauer, who attended NU from 1972 to 1975. “Here I was as a sophomore directing a major production.”

Warshauer cites financials as Mee-Ow’s biggest challenge. The student-directed show did not have a lot of funds or faculty assistance. However, Warshauer said, the students had a lot of talent and creativity.

“It grew because of the talent there was initially,” he said. “As the years went by, it found its own rhythm in terms of sketch comedy.  This was before ‘Saturday Night Live,’ and actually a lot of people who were in Mee-Ow ended up on ‘Saturday Night Live.’”

“It added real energy to the show,” Brogger said. “There were good Northwestern musicians too. It allows energy to the auditorium. We blended it with the comedy itself. When the lights go out, it would add such rhythm to the show.”

Back at the Arts Alliance garage, Communication junior Emma Cadd and Communication senior Amina Munir paint another layer of purple onto the boards. Dark purple and lavender paint freeze on the wood.

“All of our set is designed around our theme to kind of look like a basement where girls are having sleepovers,” Cadd said.

Cadd and Munir are co-directing the show this year. The show now only has eight people, including themselves.

“I think my favorite part is that the people on Mee-Ow are my best friends,” Cadd said. “They’re really smart, funny people. It’s a privilege to work with them.”

“And to work with them is such a fun process in putting together such a fun event,” Munir said. “Everyone having fun is important to us.”

“The whole process feels like a party,” Cadd said.

“It’s so fast compared to a play,” Buetow said. “The plays I’ve been in have at least double the time, but I kind of like that about Mee-Ow. It’s like instant gratification.”

Mee-Ow has affected many of its alumni in the long run. Michael Simon (Communication ‘85) participated in the 1983 show, and writing sketches and creating scenes influenced him in his current career as a crime novelist.

Brogger also said improvisation has affected him in his career.

“In the show business, we do creative things,” Brogger said. “I always look back on the improv experience — to be creative, to be on your feet and to be supportive of others. I’ve taken that through every bit of my creative career.”

The show will take place Feb. 20 to 22, and many alumni, including Warshauer, plan on attending this show in honor of Mee-Ow’s 40th anniversary.