Men’s Swimming: At the end of their journey, Northwestern seniors look forward to challenging Iowa 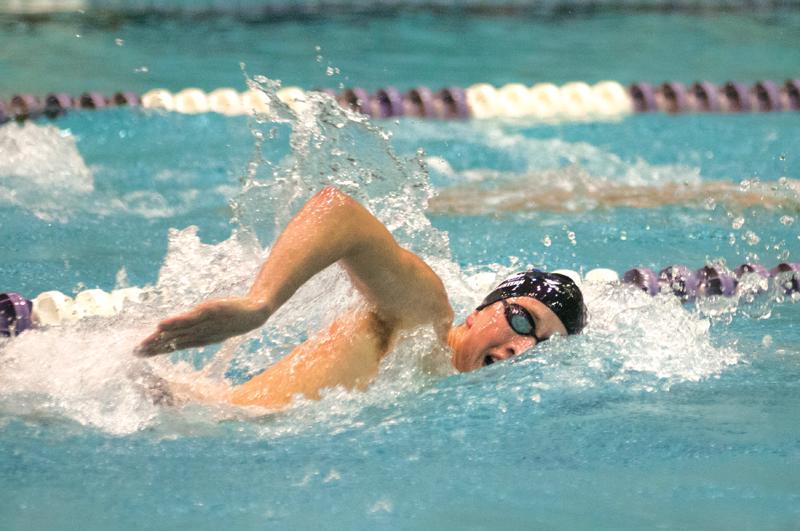 A year ago, Northwestern lost to Iowa despite then-freshman Jordan Wilimovsky easily winning the 1,000 meter freestyle. The Wildcats need the sophomore to prevail in the distance freestyle events in Saturday’s senior-day rematch against the Hawkeyes.

Northwestern’s seniors swim their last home conference meet Saturday morning against No. 21 Iowa, and in the eyes of the Wildcats’ senior class, there’s no other way they would have their home script end.

The senior class is coach Jarod Schroeder’s first group he’s seen from recruiting until graduation. When Schroeder recruited the senior swimmers, he sold them on a vision for the program instead of tangible results. After four years, he believes he’s finally seeing his vision come to fruition.

“I always wish I had an extra year or two with seniors,” Schroeder said. “They’ve helped a lot over the four years. It’s been a slow process. But this season has showed that we are right there. We are knocking on the door, and I’d love to send them out with a bang.”

The Cats have their work cut out for them against a familiar opponent in the Hawkeyes. NU last beat Iowa during the team’s golden age, when Olympians Matt Grevers and Mike Alexandrov wore an “N” on their speedos.

But there’s something different about this NU team compared to those of previous years. The Cats have not lost a meet they should have won (even though they almost did after collapsing against Notre Dame two weeks ago). Senior captain Tim Smith said the team’s strong times so far this season have helped its confidence heading into Saturday’s big meet.

“We’ve been swimming a lot better mid-season than we have in previous years,” Smith said. “We are at the same level of a better team. It’s a different mindset. We are much more confident when we are racing against a team we know we can beat. It’s not like we are hoping for something to happen anymore.”

As good as some individual times have been lately, one difference maker for NU could be its ability to finish. Their last time in the pool, the Cats led for most of the meet against Notre Dame but fell behind late and ended up tying. The team can’t afford to take its foot off the pedal against a deep team like the Hawkeyes.

One key event will be the 100-yard butterfly, which Schroeder said could be the meet’s competition-deciding race.

Another potential factor could be the Norris Aquatics Center crowd. NU knows Iowa fans travel very well, and even Schroeder admitted the Hawkeyes could end up with an atmosphere that feels like a home-pool advantage. But the idea of clumps of black and yellow in the bleachers won’t phase the team.

“Being a small team, we have a great fan base, and the parents always come to our meets,” Stephens said. “You can’t say enough about that and how awesome it is to see them out there.”

Even if NU can’t find that magic on senior day, Smith said the 2014 class hopes to see a completely different program from that of four years ago in the reflection of the pool Saturday.

“When we were being recruited, he wanted us to be a top-25 team,” Smith said. “It’s been a long process, but when we leave here and if we beat Iowa, it says we are a top-25 team and only getting better.”