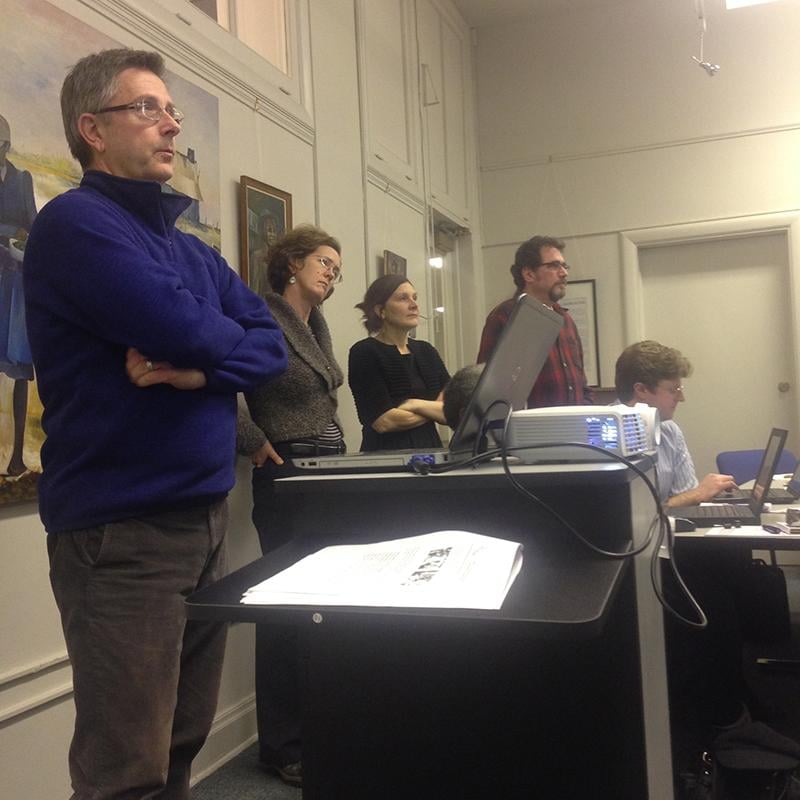 Ald. Mark Tendam (6th) attends the Evanston Economic Development Committee meeting Wednesday night. The alderman and the rest of the Committee discussed the options for a possible new Evanston logo.

The committee decided to create a subcommittee to discuss possible changes to the city’s logo during their monthly meeting at the Lorraine H. Morton Civic Center, 2100 Ridge Ave. Ald. Ann Rainey (8th) encouraged the creation of the subcommittee.

“We need to look at our current logo and evaluate it,” Ald. Mark Tendam (6th) said. “If we want to, we have the opportunity of going back to the basics of really trying to understand what is it that symbolically represents this community.”

Tendam discussed branding and the simplicity in logos for brands such as Facebook. The discussion of the logo then shifted to financial costs, which city manger Wally Bobkiewicz said would not be too much of a concern, since most of what the logo is used for is digital.

“The ability to change it out on agendas, on the website and all that, the cost is not as substantial,” Bobkiewicz said.

After questions and comments raised by individual members on the committee, they decided to create a subcommittee to focus generally on the logo situation.

Mayor Elizabeth Tisdahl was not present, but a staffer was there to update the committee about the two vacant retail spaces in the city formerly occupied by Dominick’s grocery stores. The two Dominick’s left Evanston on Dec. 28 when the store closed its Chicago-area locations.

Tisdahl will meet with aldermen Wednesday to discuss the situation, the staffer said. Like Tisdahl, the property owners have no new information about the spaces, the staffer added.

Now We’re Cookin’, a Chicago and North Shore food center, gave updates about common questions they were asked, ranging from startup costs for food businesses to requirements for food production. Representatives from the center discussed new trends in the food industry. They have new partnerships and increasing seminars, a representative said.

The representatives also brought baked goods from some of their clients, including Delizioso! and Brownie (Cubed) for the committee and attending audience.

“You have perfectly demonstrated the one-on-one contact critical for the tasting aspect,” Ald. Melissa Wynne (3rd) said of the representatives after presenting baked items. “I certainly would love to know where we can acquire all of these.”