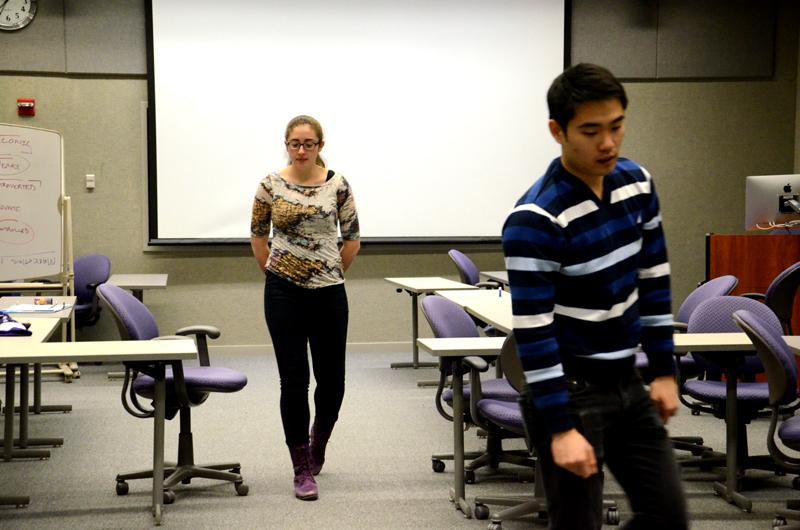 Members of Beg To Differ rehearse a scene from “Ubu Roi.” The new theater group for non-majors will put on its first production in February.

There’s a new theater group at Northwestern, and it has an added twist — no one on the executive board, cast or production team is a theater major.

Beg to Differ: Theatre for Non-Majors, was envisioned as a way for NU students who have not had much experience with theater to become involved with something they enjoy. The group does not accept any theater or performance studies majors.

“At this point, we have a group of people that all enjoy theater but never get a chance to do it,” said Scott Spicer, the group’s president and a Weinberg sophomore.

He said the competitive nature of NU’s theater program can discourage non-majors from auditioning for productions.

Medill sophomore Kate Stein, a former Daily staffer, is the co-stage manager for the group’s first production, “Ubu Roi,” and has no previous stage experience.

“I realized too late in high school that I wanted to be on stage,” she said. “The group is a great way for people who were in theater in high school but decided not to study it to be involved with something they love doing.”

The members of the current executive board first thought of the idea for the group while participating in the Kaplan Humanities Scholars Program’s annual 24-hour play festival. The group began to host information sessions to bring interested students together. However, Jesse Itskowitz, the show’s director, said trying to bring together interested students from NU’s different schools was difficult.

“What’s great about theater majors is that there’s tons of them,” the Communication sophomore said. “In restricting ourselves to people who are not theater majors, it was a real challenge. Putting together the cast was easy, but in putting the production team together, we had to do a lot of footwork.”

The lighting, design and set teams include engineers, and the sound team includes students from the School of Communication and the Henry and Leigh Bienen School of Music.

Itskowitz said raising money has also proven to be difficult. The group has been relying primarily on fundraising and donations from families and others interested in the program and is also looking at grants within the Weinberg College of Arts and Sciences and the School of Communication.

“At this point, I don’t think we’ll have to cut any of our creative and ambitious goals because of money, but it has definitely been a struggle,” Itskowitz said.

Weinberg sophomore Abhi Veerina  said as a transfer student, he became interested in Beg to Differ after seeing members of the group at The Rock while walking to class one day. Veerina, who was involved in theater in high school, plays multiple characters in Ubu Roi, a farcical play by Alfred Jarry that premiered in 1896, and described it as “basically ‘Macbeth’ meets ‘Hamlet.’”

“Everything that happens in the show is very serious to the characters, but what we are doing is absolutely ridiculous,” he said.

The show will be performed Feb. 7 and 8 in the Jones Great Room.