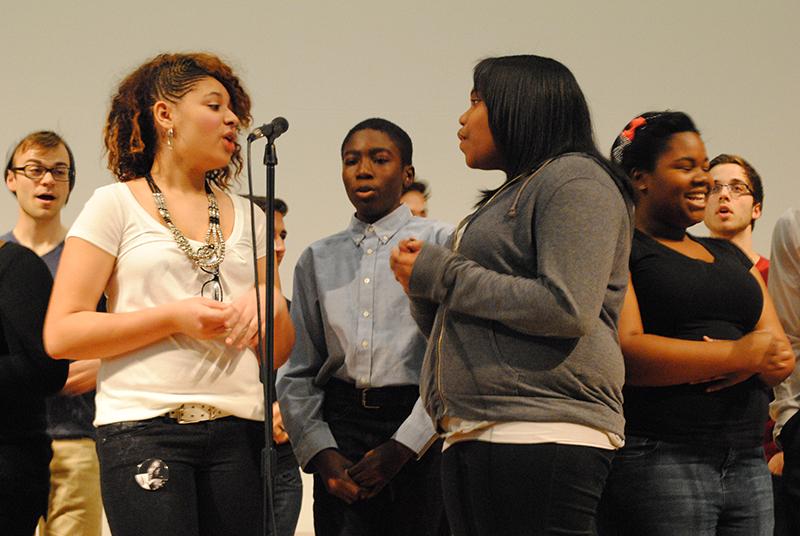 More than 50 years after Martin Luther King Jr. gave his “I Have a Dream” speech, his dream is still a distant goal, Evanston residents said Monday at a community event.

In commemoration of Martin Luther King Jr. Day, the Youth Organizations Umbrella organized its 8th annual Diverse Evanston Walks United event, during which students from local schools performed. More than 200 people attended the event, which began with a picture slideshow of students from the Dr. Martin Luther King Literary and Fine Arts School and recordings of King’s most famous speech read by youth.

Speakers focused on how to achieve King’s dream today, when segregation is no longer allowed by law, but income equality and other social problems have hindered the movement for full equality. Y.O.U. executive director Seth Green introduced the event’s theme, “What It Takes,” and praised teachers in attendance for their dedication to youth.

“We have moved forward in laws … so it is seemingly possible for people of all races to succeed,” Green said. “It’s not as much about the courtroom and even more about the classroom.”

Mayor Elizabeth Tisdahl said after the event that income inequality is an obstacle to achieving the social equality King preached.

“The most critical challenge of our time is income inequality,” Tisdahl told The Daily. “It impacts a lot of things fought for in the civil rights movement.”

Y.O.U. mentor Charles Jefferson said he had to learn to acclimate to Evanston’s diverse community after he transferred to Evanston Township High School at age 15.

Now a Columbia College Chicago senior studying broadcast journalism, Jefferson encouraged young people to work to bring about change instead of relying on elected officials to do so.

“We as a community have to band together, and we have to take back our streets,” Jefferson said. “The type of stories I hate to cover is when a young person loses his life over something senseless. Frankly, I am really tired of it, and you should be too. It’s not a black thing. It’s not a white thing. It’s a community thing.”

The speeches were mixed with group and solo performances by local teenagers. Manuel Diaz, a student from Nichols Middle School, read his poem near the beginning of the event.

“Someday, the only insult will be not to invite someone to your birthday,” he read.

The performances included an a capella group composed of nine ETHS students who sang Bill Wither’s “Lean on Me.” ETHS sophomore Angela Zachery said although the high school has an a capella group, the training at Y.O.U. was “more fun and upbeat.”

The group of ETHS students practiced the song for two weeks and learned techniques such as beatboxing. They coordinated with Northwestern’s a cappella group Freshman Fifteen on the production.

“I knew I liked to sing. Singing in front of people is kind of my downside because I forget my lyrics,” ETHS freshman Michael Henry said. “(The members of Freshman Fifteen) are really good friends, and they give really good advice. They made me step outside.”

During the event, Ald. Delores Holmes (5th) and Y.O.U. Founder and Director Emeritus Don Baker were given awards for their leadership in the community.