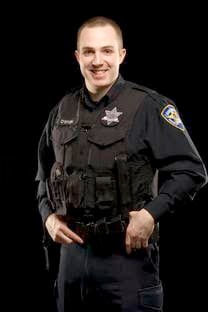 Evanston Police Officer Sean O’Brien received a national officer of the month award. He received the recognition after saving a boy in March 2013.

An Evanston police officer won a national award months after pulling a child out of a nearby river, the Evanston Police Department announced Thursday.

National Law Enforcement Officers Memorial Fund named Sean O’Brien officer of the month. He will be recognized during National Police Week in May 2015 at a luncheon with the other monthly winners, according to a news release.

O’Brien was on his day off on March 5, 2013, when he noticed a child playing alone. Concerned because of the weather conditions, O’Brien pulled his car over and tried to speak with the boy.

The child ran away from O’Brien but toward the Des Plaines River, into which he threw a chunk of snow. The boy jumped into the freezing water to get the snow, and O’Brien jumped in after the boy, police said. After seeing the boy’s Chicago Bears hat, O’Brien found and pulled the boy out of the river, took him to his car and called emergency services.

The boy, who wandered away from his grandmother’s home, was released later that day from the hospital.

“Officer O’Brien acted without concern for his own safety,” EPD Cmdr. Angela Hearts-Glass said in a news release. “It is without dispute that Officer O’Brien performed a true act of heroism and bravery.”

O’Brien has also been recognized as EPD’s Officer of the Year and with the Hero Award, police said.

“His willingness to risk his own safety in the face of danger to save the life of a child shows a true embodiment of a heroic spirit,” the fund’s CEO and chairman Craig W. Floyd said in a news release. “He is most deserving of the Officer of the Month Award.”