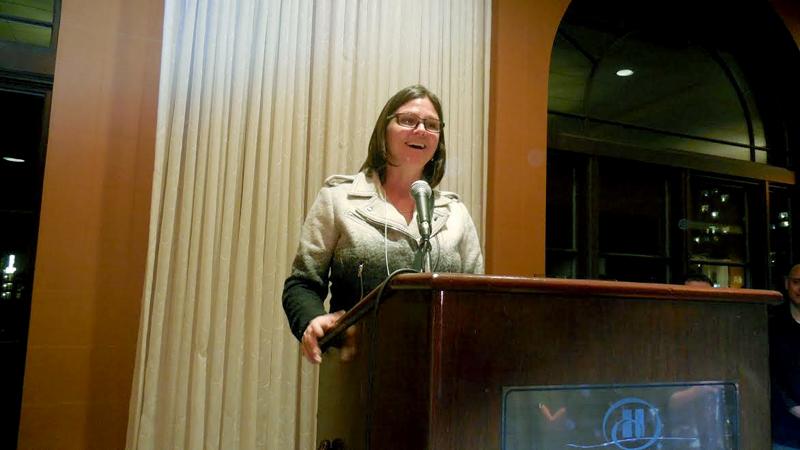 Rebecca Berneck, the new president of the Evanston Chamber of Commerce, addresses a crowd of about 200. The 94th Annual Celebration and Awards was held at the Hilton Orrington/Evanston on Tuesday evening to honor two members of Evanston's business community.

The Evanston Chamber of Commerce welcomed its new president Tuesday night and honored two members for their community contributions.

About 200 people attended the Chamber’s 94th Annual Celebration and Awards at the Hilton Orrington/Evanston, 1710 Orrington Ave.

“I hope that everyone here is just as excited about what we’re doing as the new board members are,” said Rebecca Berneck, the new Chamber president.

Berneck is the owner of a local business called Officeheads, a financial management service for small companies, and an avid vintage motorcycle racer. She succeeds Dick Peach, who is stepping down this year as president of the Chamber.

“It’s going to be a wonderful year coming up,” Peach said.

The Chamber named Joe Romano, president of Romano Wealth Management, Small Businessperson of the Year. Romano’s father and uncle founded the business 51 years ago in Evanston, and the company now manages more than $1 billion in funds for its clients.

“To be recognized today by my community and peers has extra-special meaning,” Romano told the crowd that included his father, Richard. “It is a fulfillment of my father’s vision.”

Jane Doyle, founder of Center for Independent Futures, received the Non-Profit Award. Doyle, originally from Cincinnati, moved to the Evanston area about 38 years ago to raise her four children. She started CIF 12 years ago to support individuals with disabilities to live independent, full lives.

“The past recipients have done so much,” Doyle said. “It’s just humbling.”

Her foundation serves more than 100 individuals annually with programs, support and education, according to its website.

Her daughter, Paige, who was born with developmental disabilities, is the foundation’s inspiration, she said.