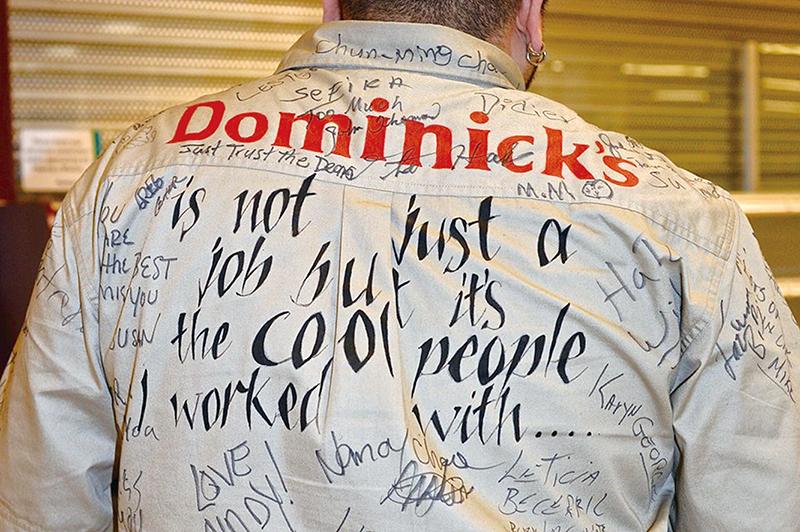 Friends of the Dominick’s branch formerly located at 2748 Green Bay Road sign a shirt at the store’s farewell party. Both Evanston branches closed in December.

The shelves were almost empty. The red and green neon letters were flickering for the last time. But many Evanston residents still wanted to say their goodbyes before the city’s two Dominick’s grocery stores closed Dec. 28.

“There was a lot of upset in the community,” Evanston resident Pat Maunsell said.

Maunsell called Ald. Jane Grover (7th) to express interest in organizing an event to show appreciation for the employees at her neighborhood Dominick’s, 2748 Green Bay Rd. Through emails and social media, Maunsell and Grover put the word out about a reception at the store and got an immediate response from the community. Residents brought food and live music and created a banner for people to sign.

“I thought it would be nice to do something to acknowledge the service of folks who were losing their jobs,” Maunsell said.

At Evanston’s other Dominick’s location, 1910 Dempster St., Dickelle Fonda and Asa Gezelius also wanted to thank the employees that had served their neighborhood. They held a similar reception, food and banner included, at the end of December.

“There were a lot of tears, a lot of hugs, a lot of goodbyes,” Fonda said. “It was a very emotional reception.”

As a part of the events, resident Lynn Trautmann created a Facebook page called Evanston’s Dominick’s Community. Trautmann, a local photographer, filled the page with photos of both shoppers and employees at Dominick’s.

But those same employees are now largely out of work, and Maunsell said many of them had been working at the supermarkets for decades.

“My hope is that people will look at them as really experienced and smart and committed,” Maunsell said. “But in the reality of our economy, we’re down a grocery store chain and it could be harder.”

“The extraordinary customer loyalty to this Evanston grocery store can be attributed to the professionalism, kindness and exceptional service of each store employee,” the letter said. “As both store customers and neighbors, we consider the store’s employees to be our neighbors as well, wherever they happen to live.”

Kevin Schneider, a longtime Dominick’s employee familiar in the Northwestern community for the “Cards for Kevin” campaign, has landed a job at Jewel.

Doug Meffley, director of digital and social communications for NU athletics, said he had built a friendship with the 37-year-old Schneider through Schneider’s regular visits to the NU athletics office. So when the Center for Independent Futures, an Evanston organization that focuses on helping individuals with disabilities, reached out to Meffley to assist Schneider with job interview skills, he was happy to help. Meffley said Schneider was hired almost right away.

“His reputation preceded him,” Meffley said. “He was an ambassador at Dominick’s, and now at Jewel.”

The store closings have also affected Evanston shoppers, especially those who relied on the Dominick’s on Dempster Street.

“For many people north of there in the central ward, that was their main source of groceries,” Fonda said. “Many don’t have cars, so now they are walking to Jewel, and that’s a long walk in the cold.”

Other grocery stores in Evanston include Whole Foods, Trader Joe’s, Aldi, Jewel-Osco and Food 4 Less. But Fonda said there is no direct bus route to Jewel, and the buses which travel downtown only go to more expensive markets.

Fonda said although some people walk to the lower-priced Food 4 Less, 2400 Main St., there is still a need for a “decent, quality grocery store” with reasonable prices.

But for Maunsell, the biggest loss is the community Dominick’s had created.

“The employees were people I saw every day that I became friendly with,” Maunsell said. “My son’s kindergarten class took a field trip to Dominick’s when he was little. … They watched your kids grow up.”