Women’s Basketball: Wildcats pull out a nail-biter against Purdue 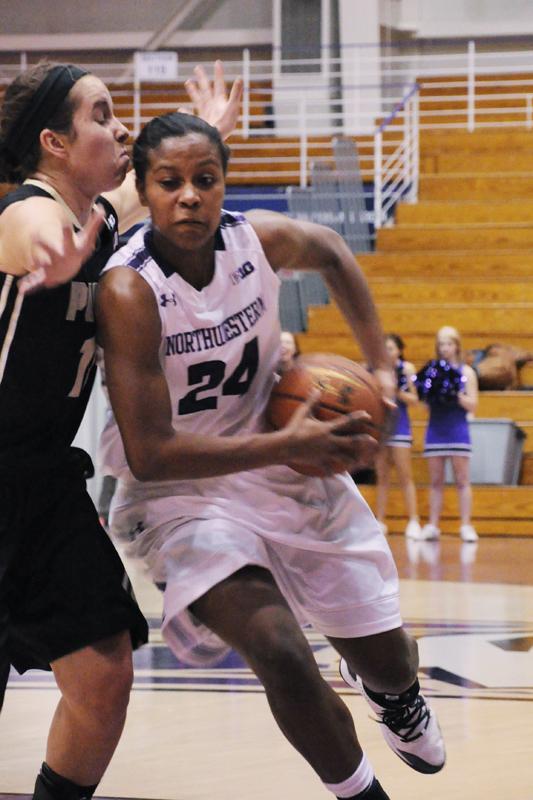 Freshman Christen Inman drives against a Purdue defender Thursday night. The guard tied for the team lead with 18 points as the Wildcats upset the Boilermakers at Welsh-Ryan Arena.

Northwestern followed an incredibly tight road loss with a just as nerve-racking home win Thursday in their second Big Ten game of the season.

“It was a great Big Ten game,” coach Joe McKeown said. “A tale of two halves.”

The game went back and forth throughout, with Purdue leading by as many as 11 in the first half, and NU up by as many as 14 in the second, but the final result came down to the last minute of play. The Boilermakers clawed their way back from the second-half deficit and hit a three with 1 minute on the clock to pull within 2 points. On the ensuing possession, the Cats were called for a costly over-and-back penalty and Purdue looked poised to take the lead.

But NU responded with its best defensive series of the game, got a rebound from a forced Boilermaker shot and scored an easy transition basket to push their lead back to 4. Purdue wouldn’t go quietly though, coming right back down the floor to hit another three to pull within 1.

Forced to foul, the Boilermakers sent guard Ashley Deary to the line with 15 seconds remaining. The freshman hit just one of two, and Purdue brought the ball up to take the final shot of the 2-point game. Just as the Cats seemed doomed to another heartbreaking loss, their excellent defense prevailed again and stopped the Boilermakers from even getting a shot off. NU hit one final foul shot with a second on the clock.

NU’s offensive production came from an unusual place. Freshman forward Nia Coffey was limited in the first half due to picking up three early fouls. Maggie Lyon stepped up to take her place and had an excellent recovery game. After shooting just 2-for-16 against Nebraska, the sophomore guard finished with 20 points.

“Good shooters have to have amnesia,” Lyon said. “We were focused on coming out strong. … We were so angry from the Nebraska game and we finally came together.”

Coffey remained quiet in the second half thanks to a fourth personal foul, but Deary and freshman guard Christen Inman continued their strong play at the point and in the paint, respectively, to round out the Cats’ talented trio of freshmen. Deary commanded the offense with an impressive 11 assists, and Inman kept the defense off-balance with her 18 points.

Sophomore forward Lauren Douglas had another great game off the bench, solidifying her role as the team’s sixth player. After posting 13 points against the Cornhuskers, she had 11 points and seven rebounds against the Boilermakers.

However, despite Douglas’ individual effort, the rest of the team struggled on the boards and was out-rebounded by Purdue 52 to 36. NU’s more efficient shooting, especially in the second half, allowed them to overcome that deficit. The squad shot 43.6 percent from the floor, including 6-for-12 from 3-point range, compared to Purdue’s 33.8 percent.

The “Cardiac Cats” will look for a more comfortable victory Sunday in their game at Minnesota.

“It could have gone a lot of different directions,” McKeown said, “but I liked the way we closed out.”