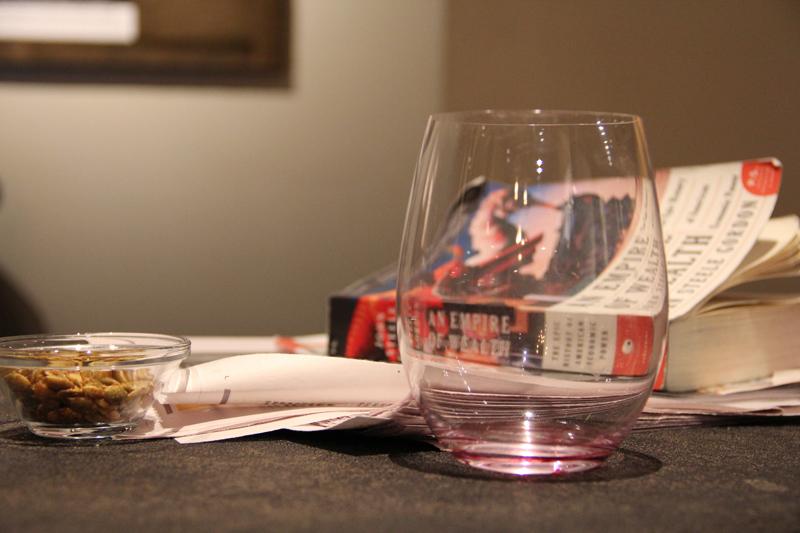 An Evanston resident enjoys a cup of wine at the Sherman Avenue Starbucks. The Starbucks recently began using its alcohol permit, which permits it to serve wine and beer after 4 p.m.

The renovated Starbucks in downtown Evanston now serves wine, beer and small plates of food in the evenings, making it one of only 29 locations nationwide to offer alcoholic beverages.

“These are really designed for customers or communities where we know that there are a lot of people that are looking for that space between work and home, where they can meet up with their friends, where they can unwind and get a wine or drink, but that’s not a bar or a restaurant,” she said.

The menu includes five types of white wine and four types of red wine priced between $7 and $15 per glass, as well as two types of beer at $4 per bottle. The small plates selection includes bacon-wrapped dates, flatbread pizzas and cheesecake.

Despite some concern over the location’s popularity with Northwestern students, the Evanston City Council approved the store’s request for a liquor license on Oct. 28 but moved the starting time for liquor sales from 2 to 4 p.m.

“Students are still coming in,” the spokeswoman said after speaking with the local management. “It just means that there’s an expanded menu and an expanded line of options for whoever’s coming in, whether it’s students or it’s just folks who live in the area.”

Weinberg junior John Andrade, a frequent Starbucks customer, said most students still did not know about Starbucks Evenings, despite it being active for almost a month.

“I was just like, ‘Oh. That’s weird,’” he said. “I’m not gonna get crunk pre-gaming at Starbucks, but it’s cool if some people want to.”

He does not expect many students to make use of it as a bar space but perhaps as a way to “take the edge off” after a long night of studying.

The Starbucks Evenings program is being piloted in Chicago, Atlanta, Portland, Washington, D.C., and southern California as one of many initiatives to make individual Starbucks locations relevant to their neighborhoods, the spokeswoman said.

“At this point, it’s very much a new concept for us. It’s something we’re testing in different markets. We only have it in 29 stores out of the 19,000 that we have globally,” the spokeswoman said. “We’re certainly very far away from scaling this out much more.”