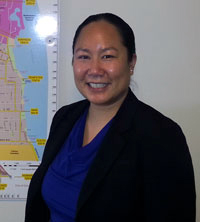 The Evanston Police Department appointed Sgt. Melissa Sacluti in December as the force’s first LGBT liaison. The EPD created the position at the recommendation of Ald. Mark Tendam (6th) and the city manager’s office.

As part of an ongoing effort to serve the city’s lesbian, gay, bisexual and transgender community, the Evanston Police Department appointed the force’s first police liaison to the LGBT community last month.

EPD appointed Sgt. Melissa Sacluti to the position at the end of December.

Ald. Mark Tendam (6th) said he has been working with the city manager’s office to “(improve) the city’s gay-friendly status.” The two parties recommended that EPD create the position.

“We pride ourselves on being progressive,” Tendam said. “We were looking at other ways of reaching out to the community and letting LGBT (residents) know that there are resources, and that was one of the primary resources that came to mind,” he said.

The Daily had a chance to ask Sacluti, who has served the department for more than 10 years, about her new role.

The Daily Northwestern: What goals do you have for your new position as LGBT liaison for the Evanston Police Department?

The Daily: How do you plan to implement these goals?

Sacluti: We’re currently talking about how to do that. We’re trying to reach out to other people that are members of the LGBT community. We have a few meetings that are set up both from the ETHS high school and also from Northwestern University, so we don’t have anything planned just yet, but after we get meetings set up with them, we might have a better outlook as to where we’re going with this.

The Daily: What prior experience will you contribute to the EPD?

Sacluti: I’ve been a police officer for just over 10 years now and I’ve been a sergeant for almost three. I’m pretty knowledgeable as far as how our department runs. I know our community pretty well. Our community is very diverse. I think just my everyday experience dealing with people and dealing with the community is going to help me serve the LGBT community.

The Daily: What are your responsibilities as LGBT liaison?

Sacluti: I’m basically going to be serving as a voice for the LGBT community. If there are any issues that come up, if people need help or need resources and they aren’t comfortable going certain places, they can use me as a resource and I’ll find them the resources that they need. Basically fostering positive relationships with the LGBT community and the police department and making sure that we are sensitive to the residents’ needs.

The Daily: What will a typical week on the job look like for you as far as the LGBT liaison position goes?

Sacluti: Honestly, it depends on what comes up. In my 10 plus years of being here, we really haven’t had too many issues with the LGBT community. I haven’t had interaction with members of the LGBT community on a daily basis or anything like that. I mean, Evanston is extremely diverse. If something comes up, that’s where my position would come into play. If people needed resources or things like that, that’s where I’d come in and help.

The Daily: Have you met with city officials to discuss your appointment or have any reached out to you after the announcement?

Sacluti: I actually had just a short meeting last week with one of the assistant city managers, and we just discussed as I stated earlier some of the activities that we can have that would engage the LGBT community, and some of those things that we were talking about were like a bike ride or a run, a 5K run within Evanston. Things like that would engage the community where we could all get together and just kind of have fun. We’re still talking about other activities that may come up, but those are still underway. We don’t have anything completely concrete just yet, but there are things that we’re planning.

The Daily: What do you want the LGBT community in Evanston to know about you and your position?

Sacluti: That I’m available and I’m here. I’ve been, like I’ve said, with Evanston for over ten years now. One of the reasons why I came to work for Evanston is because of how very diverse the city is. In my mind, Evanston truly is a mini Chicago, and I want people to know that if they need something or if there’s something that I can do for them, that I hope they reach out to me because I’d be more than willing to help and accommodate them.

The Daily: Lastly, what does this position mean to you?

Sacluti: It means so much to me. Honestly, I wasn’t expecting it. I’m very, very honored to be in this position and I recognize its importance. To me, it’s important that people are heard and if it means that somebody is marked as a permanent liaison, that’s important for the people that feel like they’re not being heard.