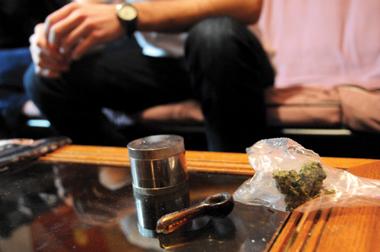 A Northwestern Medicine study showed teens who used marijuana heavily experienced abnormal changes in their brain structures. Results from the study suggest that chronic use of marijuana could result in long-term effects on memory.

A recent study published by a research assistant professor in the Feinberg School of Medicine revealed new evidence linking marijuana use with lower cognitive functioning and brain abnormalities similar to those seen in schizophrenia patients.

Matthew Smith, the lead author on the study, has been researching the relationship between schizophrenia and marijuana use for several years. In research published Dec. 16, he observed four groups of people, two sets of healthy individuals — with and without history of marijuana use — and two of individuals diagnosed with schizophrenia on the same classification.

Both the marijuana-using groups had regularly used the drug for three years and were then tested after being abstinent for the next two years.

Smith said those who used marijuana showed similar brain abnormalities, though one group was diagnosed with schizophrenia and the other was not.

“We’re not saying that marijuana causes this abnormality because in order to say that this causes it, we need data over time,” Smith said.  “Since we don’t have data before or after, we can only say these relationships are significant and linked.”

The study also revealed a relationship between earlier marijuana use and greater brain abnormalities, but Smith said more data over time is necessary to prove this relationship.

Though other studies have shown the negative effects marijuana use has on the brain, Smith said his study was unique in its focus on working memory and specific brain abnormalities.

“This is one of the first studies to demonstrate a direct link between marijuana-related brain abnormalities and cognitive function,” Smith said.

Colorado recently legalized the use of marijuana, and Washington state is beginning to issue licenses to individuals to grow and distribute the drug this year.

Dan Linn, the executive director of the Illinois National Organization to Reform Marijuana Laws, an organization aimed at promoting legislation geared toward legalizing marijuana, said the study will likely not have an affect on future legislation.

“There’s always been this link between cannabis and schizophrenia,” Linn said. “I think lawmakers realize that even if this is a problematic substance, prohibiting and outlawing this substance outright for everyone is not a good policy.”

Frances Fu, the co-president of Students for Sustainable Drug Policy, said the study’s results were ultimately positive because students need to know both the pros and cons of drug use. The organization encourages individuals to make informed decisions on drug use through promoting drug education and reform, the SESP junior said.

“Marijuana is glamorized because it is prohibited, and I don’t think there is enough education about the negative effects of marijuana that are honest and comprehensive,” Fu said.

Smith said more research is necessary to truly understand marijuana’s influence on the brain. He said he plans to continue studying the relationship between brain abnormalities and marijuana use, focusing on the effects of abstinence and marijuana use over time.

“There’s a lot more that’s known about the effects of alcohol whereas we don’t know as much about the effects of marijuana,” Smith said. “We don’t really know what the long-term implications are. I think that more research is needed to really understand what’s going on.”