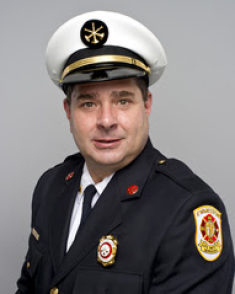 “(I will miss) the people I work with and the different challenges everyday,” Block said. “Each day was something different.”

After starting in May 1987 as a firefighter and paramedic, Block served in Evanston his entire career.

“The fire service is about people working together for so long that you know them better than your family,” Hohl said. “As time goes on, you form that bond.”

During his career, Block moved up from firefighter/paramedic to fire inspector and investigator. After becoming a fire captain, he was promoted three years ago to division chief of training and professional development.

“He ran a very efficient training division,” Fire Chief Greg Klaiber said. “He was able to work very well with members of the department to make sure they had adequate training. Just in general, he had an overall excellent career.”

Block recently received a fire chief’s commendation for his off-duty response to an incident last year. While driving, Block noticed a fire in Evanston and informed the building’s occupants to get out .

“He was completely dependable and reliable,” Klaiber said. “Once I asked him to do something, he would get it done and I was confident in his abilities. He had initiative and ambition.”

Now in retirement, Block said he plans to take time off and start another career. He’s unsure what he will do but he said his new job will probably be related to safety or fire departments.

“Looking back now, I enjoyed going to work every day,” Block said. “A lot of people can’t say that. I actually enjoyed every day and learned something new every day. I’m looking forward to moving on to something new.”