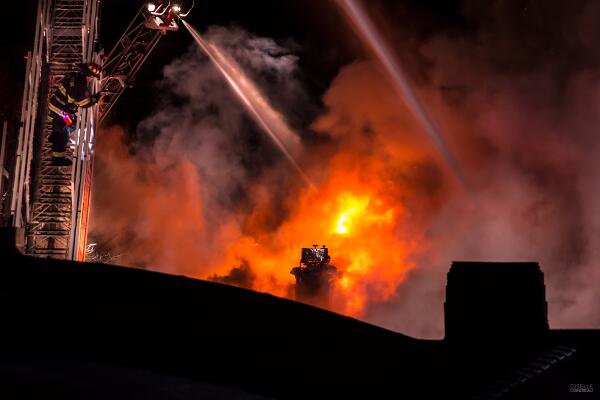 The fire started at Pine Yard Restaurant, 1033 Davis St., and destroyed nearby TechniColour Nail & Day Spa, 1031 Davis St., and Taco Diablo, 1029 Davis St. The cause of the fire is under investigation, according to the city.

The fire began at 2:24 a.m. at Pine Yard and ten minutes later, the status of the fire was elevated and other community fire departments responded, according to a city news release. Nine fire departments assisted in putting out the fire, including those from nearby Wilmette, Skokie and Morton Grove. It took about four hours to put out the flames. One Evanston firefighter was transported to the hospital after suffering an ankle injury at the scene.

According to its website, Pine Yard closed at 10 p.m. Saturday. Taco Diablo closed at 11 p.m. and TechniColour closed at 7 p.m.

The city also said 12 animals were evacuated from the nearby Bramer Animal Hospital, 1021 Davis St.

The Evanston Fire Department tweeted from the scene, posting photos and updating followers on the status of the fire. The account posted a video of the fire from an Evanston resident.

The fire was extinguished by 6:30 a.m. and other departments were released from the scene. The fire department remained to put out hot spots, the city said.

“We appreciate the outstanding efforts of the Evanston Fire Department who are protecting our city 24 hours a day,” Evanston Mayor Elizabeth Tisdahl said in a 4th Ward newsletter. “Our hearts go out to the business owners whose businesses have been lost and we are grateful that no one was seriously injured.”