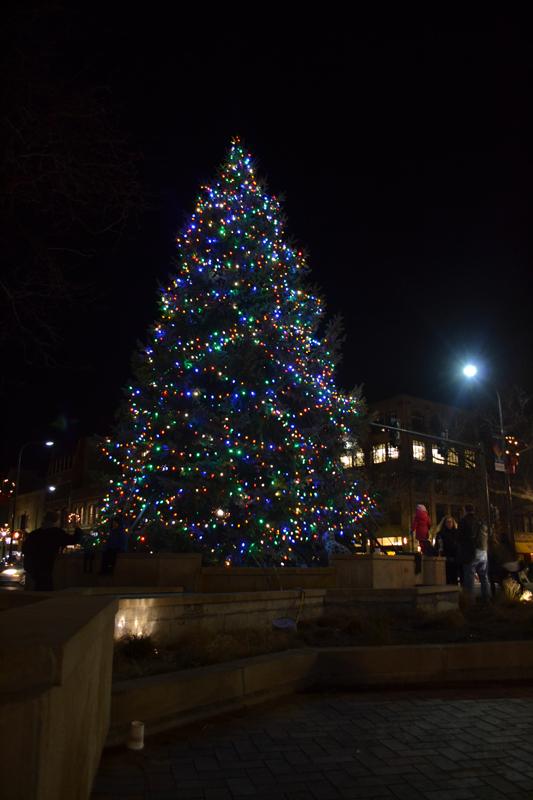 “This is a very special occasion because it’s Evanston’s 150th birthday as well as the holidays,” Tisdahl said before the tree lighting. “We have something incredibly special planned for you.”

The tree lighting was part of Holiday Bash, a five-hour event that offered activities ranging from listening to choir performances to visiting with Santa. Held near the intersection of Davis Street, Sherman Avenue and Orrington Avenue, the tree lighting commenced after Tisdahl, Santa and Mrs. Claus arrived on a firetruck, drawing crowds of people.

“It was bigger and better than planned,” Dellutri said. “I could not say enough thank yous, though, without the help of the city of Evanston because they helped us in so many ways from the stage to the lighting to the tree, just everything. It’s phenomenal.”

Holiday Bash was also made possible by Northwestern and Evanston student groups. Dance Marathon made a guest appearance, performing a routine to “Turn Up the Music” by Chris Brown. NU a cappella groups such as Brown Sugar and Purple Haze also sang for attendees throughout downtown. Dellutri said Associated Student Government also played a part in putting the event together.

The Evanston Teen Choir and the Second Baptist Church Choir performed for attendees before the tree lighting. Tisdahl led the countdown to the lighting as attendees cheered.

Glowing with colorful lights, the tree stood about as tall as the flag pole bearing Evanston and American flags adjacent to it. Dellutri said the mayor was “ecstatic” about the evening.

“It’s just been a really big community event between Northwestern, the city,” Dellutri said. “The kids have been phenomenal. We love the students at Northwestern.”