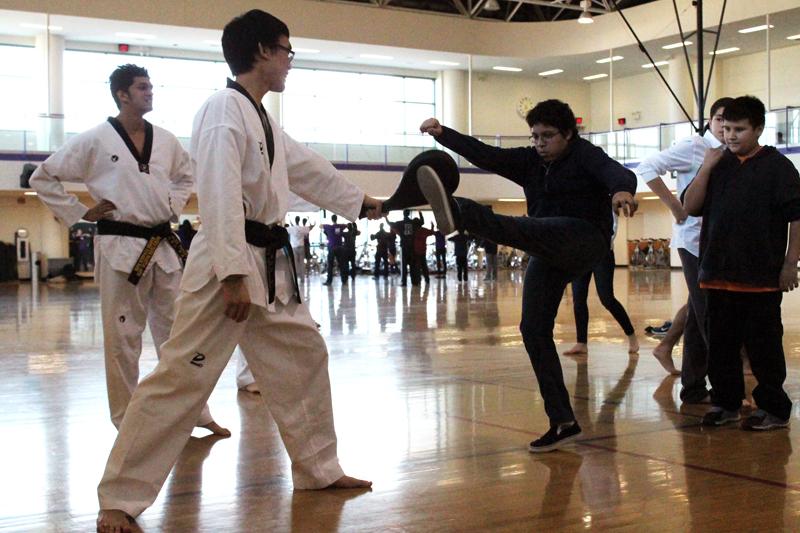 “This is a great way to tie in fitness with exposure to a college campus for many of these kids who have never seen a college campus before,” said Therese Kaltenecker, president of NU’s chapter of SFD and a McCormick junior.

During the event, students rotated through four different 20-minute stations held at the Henry Crown Sports Pavilion and Norris Aquatics Center and Norris University Center. Students participated in activities ranging from boxing with the Boxing Club to dancing with Bhangra. Additionally, students were given a 40-minute campus tour.

Erica Rodriguez, captain of the Boxing Club, ran the students through a “miniature workout” of what the team actually does, which included a warm-up and technique work.

“It’s been a really interactive activity for the kids, and I think it’s definitely sparked some interest in some of them,” the SESP senior said. “I think it gets at what they’re trying to do here: get kids excited about fitness and health.”

Last year, SFD received a grant from the Big Ten Network to put on the event and nearly 70 kids attended. However, as the group recently established a partnership with the Jahn school, the turnout was not as strong this year. Despite fewer participants, Alex Peroff, a black belt in the Tae Kwon Do Club and a chemistry graduate student, said the event was a success.

“I think the students are enjoying it,” he said. “They seem to be liking it. They are learning a little bit. In my opinion, if the kids are doing well and they’re happy, that’s just a plus in my book.”