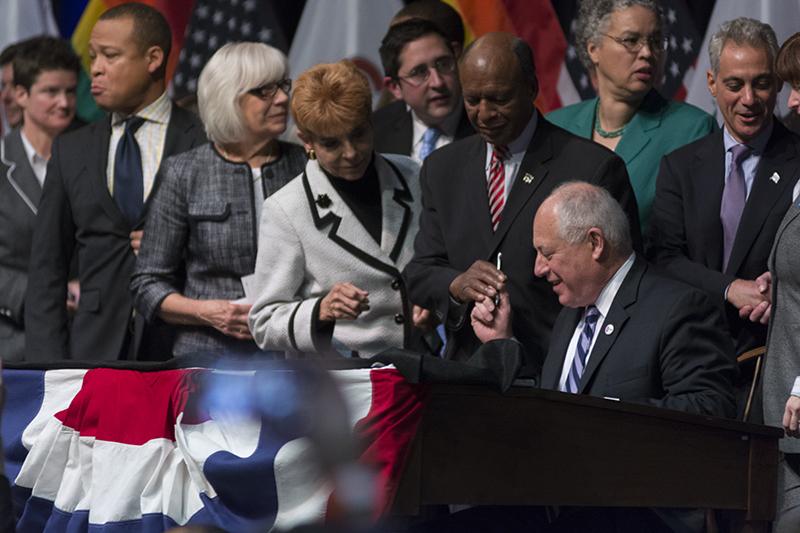 Gov. Pat Quinn presents the signed Religious Freedom and Marriage Fairness Act to the crowd gathered at the University of Illinois at Chicago Forum on Wednesday. The public ceremony included speeches from prominent state officials and lawmakers.

Gov. Pat Quinn on Wednesday made Illinois the 16th state to legalize gay marriage, an action he said would prompt other states to adopt similar legislation.

“I think that we understand in our state that part of our unfinished business is to help other states in the United States of America achieve marriage equality,” Quinn told thousands of people at the University of Illinois at Chicago Forum before he signed the Religious Freedom and Marriage Fairness Act.

The ceremony attracted a who’s who of Illinois politicians, including Chicago Mayor Rahm Emanuel and the bill’s sponsors in the General Assembly. They hailed the signing as a historic moment for the state, thanking everyone from their constituents to lobbyists.

“With the governor’s signature today, Illinois goes on record,” Emanuel said. “There is no straight or gay marriage. From now on, there is only marriage in Illinois.”

Quinn took about 8 minutes to sign the legislation and raised it in the air afterward, patting his heart.

The ceremony was free and open to the public, drawing long lines hours before it started. Inside the venue, attendees cheered and clapped for the politicians, rising for standing ovations for state Sen. Heather Steans (D-Chicago) and state Rep. Greg Harris (D-Chicago), the bill’s sponsors.

“Today we welcome all families in Illinois as equally valued,” Steans said. “As Victor Hugo once said, ‘There is nothing so powerful as an idea whose time has come.’ The time is now.”

Among the thousands of attendees, Lisa Marie Pickens came with a group from the Affinity Community Services, a nonprofit organization for black lesbian, gay, bisexual and transgender people.

Pickens said the passage of the bill means “equal protection under the law, reiteration of separation of church and state.”

The ceremony featured a singer and two choirs, which Quinn acknowledged as an important part of any celebration.

Illinois comptroller Judy Baar Topinka added to the lively atmosphere when she addressed the audience.

The signing came three days after tornadoes swept through Illinois, leaving six people dead. At the beginning of the ceremony, Quinn held a moment of silence.