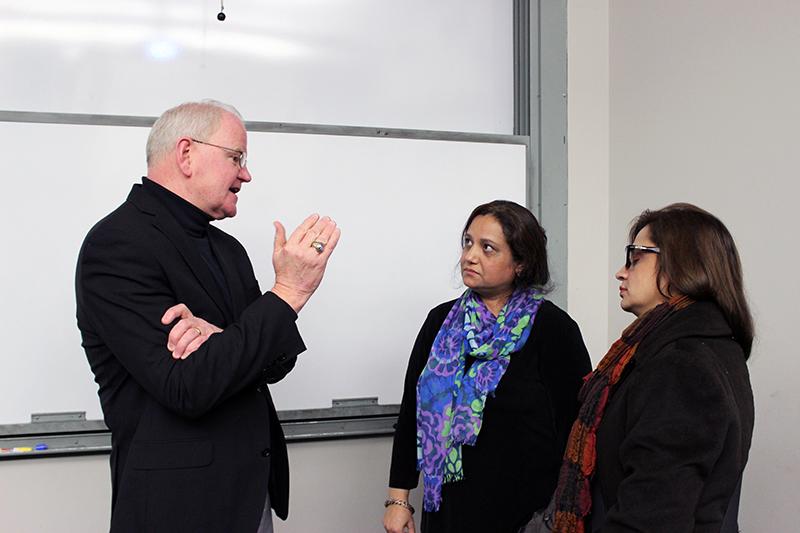 Panelist Charles E. Tucker Jr. talks with students after a discussion on drones Thursday night at University Hall. Tucker spoke about on military strategy at the panel, which was hosted by NU Conference on Human Rights.

Students sat on the floor in an overcrowded University Hall classroom on Thursday night to listen to a panel discussion about the ethical and political implications of drones.

The panel discussion hosted by the Northwestern Conference on Human Rights touched on international law and humanitarian questions. The event, which drew about 75 students, featured political science Prof. Ian Hurd and Charles E. Tucker Jr, a retired major general in the United States Air Force. Law School Prof. Stephen Sawyer was also scheduled to speak at the panel but was unable to attend.

During the event, Hurd focused on the international legal implications of drones. When asked about future drone policy and the U.S. influence on it, he argued that international law could exist without international courts to enforce it. He also said when considering drone strikes, the United States needs to look more closely at particular situations from a local perspective.

“The policy is too big a thing to be for or against,” Hurd said.

Hurd said state actors could be more accountable and transparent about the times they take innocent human lives.

Tucker focused primarily on military strategy and was critical of public concern about foreign policy at large. He said it was problematic that discussion on drones, as well as overall foreign policy, played only a minor role in the 2012 presidential election.

He emphasized that the U.S. zero tolerance military strategies are not winning strategies and repeatedly said, “You can’t spank a kid until they love you.” He criticized the U.S. military policy for coming off as “force forward.”

He said the military needs to be more “in this together” with the people in conflict zones. He also questioned long-term policy for the conflicts in Afghanistan and Pakistan.

“Tell me what the hell we’re doin’ here,” Tucker said.

Weinberg senior Soad Mona was one of the organizers for Thursday’s event, and she said she was disappointed Sawyer was unable to attend because he could have given insight into the international human rights framework. She said she was happy that both panelists mentioned increased transparency and accountability.

Weinberg freshman Kelly Ready said she did not know much about drone policy before attending Thursday’s event and wanted to learn more.

“I agreed with Professor Hurd that countries need to be held more accountable for the effects of drone strikes,” she said. “We also need to more clearly define long-term military strategy.”