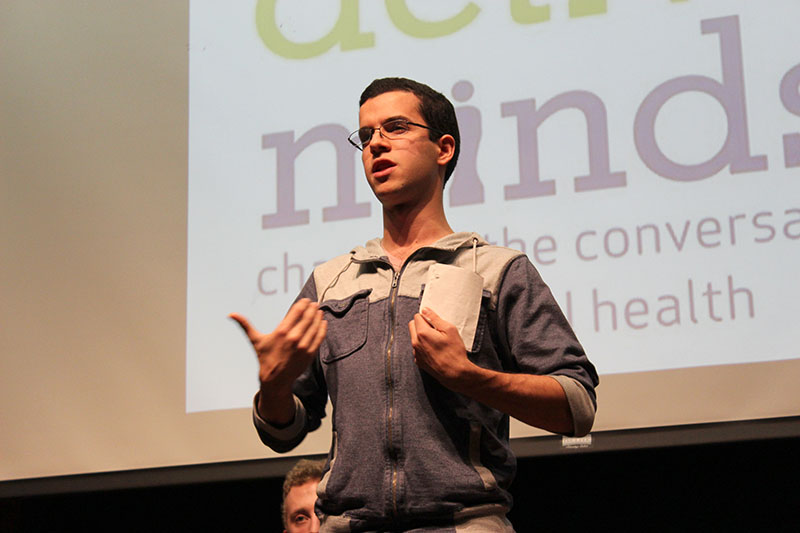 Matt Multach speaks at a discussion hosted by NU Active Minds and the Northwestern Undergraduate Psychology Association. The Weinberg senior was one of four students who shared his experience with mental illness at a panel discussion Wednesday night.

Four Northwestern students shared their stories of struggling with mental disorders at a panel on stigmas Wednesday night.

The third annual panel, which attracted nearly 200 students to Harris Hall, was co-sponsored by NU Active Minds and the Northwestern Undergraduate Psychology Association. The panel aimed to get rid of the stigma surrounding mental illness by exemplifying how it affects many typical NU students.

“This is one of my truly favorite events of the year because I get to just sit and admire the stories and heroic qualities of students getting up and talking about things that people don’t typically talk about: the struggles of life and the struggles of mental illness,” psychology Prof. Robin Nusslock said.

Nusslock, who was the panel’s master of ceremonies, started off the night by stating that mental illness is a common struggle that many people deal with. He said 25 percent of adults in the United States suffer from a diagnosable mental illness.

“Mental health is so important, especially to Northwestern students, who survive and thrive in an atmosphere of competition,” said NU Active Minds president Naina Desai, a Weinberg senior. “It’s hard to talk about because everyone else seems to be doing fantastically.”

The opening speaker, Jodi Naglie, felt the need to take a quarter off from NU in order to get treatment for her illness.

“That was a terrifying realization for me,” the Communication junior said. “The fact that I was one of the top students at my high school but couldn’t go to college just screamed failure, but to this day it was the best decision I’ve ever made.”

“Advocating for people who are struggling with similar things is very therapeutic because if I’m advocating for other people that are similar to myself, I’m sort of showing myself indirectly that I’m worth advocating for,” Oberdier said.

“Things just didn’t make sense to me the way they make sense to other people,” Beecher said. “My brain was so different from others that it has its own thing in some doctor’s dictionary, which is cool if you think of it like that.”

Weinberg senior Matt Multach also spoke and emphasized the importance of having a strong support system.

“The worst thing in almost any disorder, or at least as I understand it, is feeling alone and feeling like no one appreciates you or no one understands it,” Multach said.