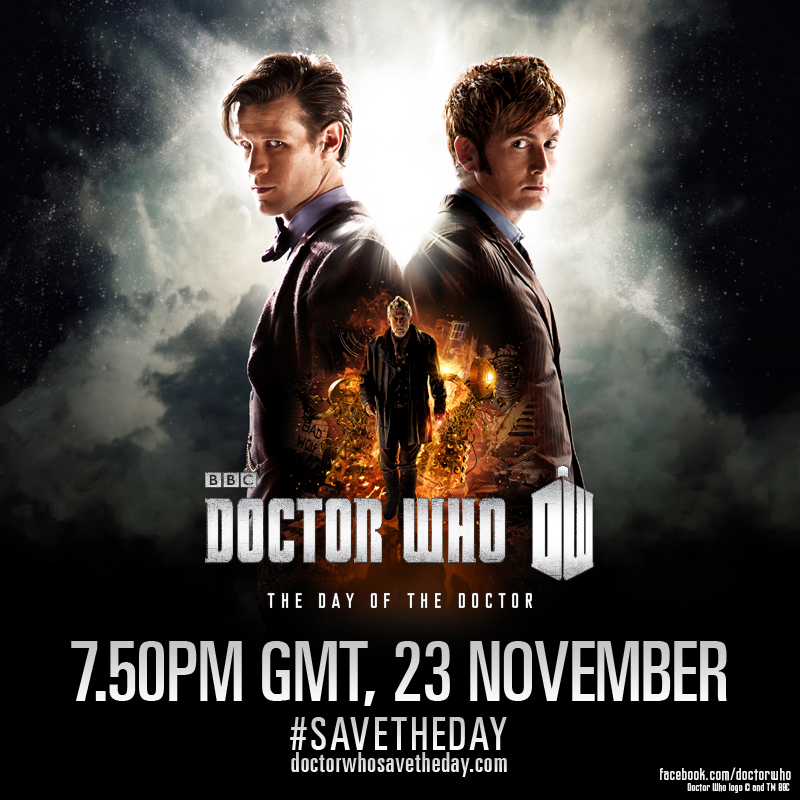 Celebrate the 50th anniversary of “Dr. Who” on Saturday.

At 1:50 p.m. Saturday, I will be sitting in Evanston’s Cinemark Century Theatres, 3D glasses on my nose, breathlessly watching David Tennant and Matt Smith team up to hopefully save the universe one more time from certain destruction.

This weekend marks the 50th anniversary of the British sci-fi classic “Doctor Who,” and Saturday’s episode will unite Doctors past and present for one of the biggest stories in the show’s history.

In case you haven’t been following the most successful sci-fi show on television (no, seriously — Guinness World Records says so) — “Doctor Who” tells the story of an ancient time-traveling alien called the Doctor. He wanders through space and time in a blue police box called the TARDIS (which stands for “Time And Relative Dimension In Space,” and it’s bigger on the inside), all while saving the universe and battling extraterrestrial evil. It’s just as crazy as it sounds — and even more entertaining. This show has survived cancellation, the regular departure of its leading man and a few really, really cheesy episodes (Farting aliens in the British government played a major role in the first season of the 2005 reboot). But against all odds, “Doctor Who” comes back from almost certain death every time — not unlike its regenerating protagonist.

So, Whovians, here’s what you need to know before the 50th anniversary special airs. And if you’ve never seen the show before, get cracking. It may be physically impossible to get through all 50 years in only a few days, but I promise once you get hooked, you’re going to want to try anyway.

1. The special will be broadcast simultaneously in more than 75 countries.
Exactly 50 years after the first episode aired in 1963, “Doctor Who” will air Saturday around the globe. Thanks to the simulcast, we Whovians here in the states won’t have to worry about our British friends spoiling the special for us online. The show is even airing in a handful of movie theaters around the country, including the downtown Evanston theater, which will no doubt be filled with plenty of fans with sonic screwdrivers and bowties.

2. John Hurt is playing the Doctor, but he isn’t one of the canonical 11.
A mini-episode released online earlier this week featured a surprise appearance by the Eighth Doctor (the criminally underrated Paul McGann), who promptly regenerated into John Hurt’s so-called “War Doctor.” Hurt’s character was born in the fire and desperation of the Time War, but this doesn’t mean we have to renumber every Doctor after him. Head writer Steven Moffat has said in interviews that although Hurt plays the same Time Lord we know and love, Hurt’s Doctor doesn’t consider himself the Doctor, so Nine is still Nine, Ten is still Ten, so on and so forth.

3. Bring on the Zygons.
From Cybermen to Daleks, we’ve seen plenty of classic “Who” villains reappear in the rebooted series, but one of the most unique creatures will return Saturday for the first time since 1975: the Zygons. These shape-shifting extraterrestrials look like bright orange squid people, but if the promotional images are any indication, they’re going to scare the pants off us as only “Doctor Who” villains can.

4. We finally get to meet Queen Elizabeth I.
Past episodes have hinted at a relationship between the Tenth Doctor and Good Queen Bess, so here’s hoping the 50th anniversary finally clues us in. Although with the return of Billie Piper as fan favorite Rose Tyler, there may be some romantic rivalry. We also know Jemma Redgrave will reprise her role as Brigadier Lethbridge-Stewart’s daughter Kate, who followed in her father’s footsteps to become the head of scientific research at UNIT.

5. This is the last time we’ll see Matt Smith before his exit in the upcoming Christmas special.
In classic “Doctor Who” fashion, the leading man departs every few seasons, leaving the titular character to “regenerate” into a new version of the same character. The beloved Eleventh Doctor will end his story at Christmas, regenerating into newcomer Peter Capaldi as the Twelfth Doctor. Here’s hoping the 50th anniversary honors Smith’s excellent turn as Eleven and sets the stage for another successful 50 years.