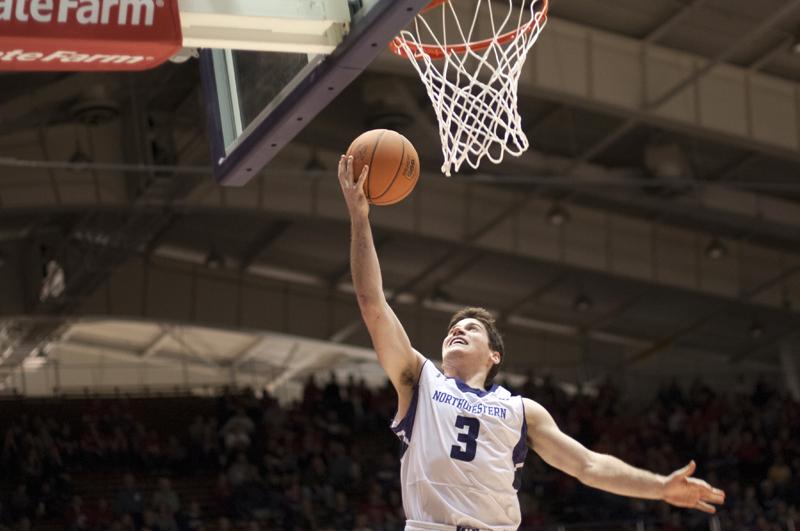 Junior guard Dave Sobolewski has been among those looking to find steady roles in Chris Collins’ rotations. A returning starter, Sobolewski is averaging only 24.3 minutes a game after playing 34.8 per contest last year.

Three games into the season, Northwestern is still a work in progress.

The Wildcats (1-2) are looking to recover against cross-town foe UIC (1-2) on Wednesday night after a disappointing loss against Illinois State on Sunday. It was NU’s second loss in a row and their first at home this season.

Offensively, the team has struggled with slow starts through three games. The Cats fell to an 18-point deficit at halftime before rallying to within 2 points in the eventual 68-64 loss Sunday. A smaller lineup, which included sophomore forward Kale Abrahamson, jump-started NU’s second-half comeback.

“I hope I can help the team win, however that is,” Abrahamson said. “I was ready to do whatever Coach wanted me to do before. If he said I was going to sit on the bench, then I’d cheer for my teammates, and if he puts me in I’m going to be ready to play.”

Going forward, Abrahamson figures to be a more consistent contributor on a team that still has a very murky rotation. Having only played 25 minutes so far this year, the sophomore has still managed to chip in with 8 points and six rebounds, numbers that project well over a full 40-minute game.

At the opposite end of the spectrum, freshman forward Nate Taphorn saw his time on the court greatly diminish during Sunday’s game. After contributing four rebounds, 5 points and an assist in the season opener against Eastern Illinois, Taphorn played just 6 minutes against the Redbirds.

“I’m just going to try to be everything that I can be,” Taphorn said. “Bring out my strengths and really focus on what I can do to help the team.”

However, the player that saw the biggest change in playing time was junior guard Dave Sobolewski, demonstrating that not even established starters are safe as coach Chris Collins continues to experiment with the roster. After averaging 35 minutes a game each of the past two seasons, Sobolewski is only playing about 24 minutes a game so far this year. Complicating matters, the starting point guard struggled against Illinois State, turning the ball over three times but picking up only two assists.

“Whether we start new guys or not, everyone’s going to get a chance to play,” Collins said. “Right now, nothing is set in stone.”

Collins will not say whether he will alter his lineup against UIC, as the starting five has been consistent through three games. The small lineup featured in the second half of the game against Illinois State was much more effective at scoring but struggled defensively without sophomore center Alex Olah and senior forward Nikola Cerina.

Both Olah and Cerina got into foul trouble early against the Redbirds and did not return to the game as the Cats were forced to play from behind. Illinois State took advantage of NU’s porous interior defense by dunking multiple times and converting a dramatic alley-oop. Collins is hopeful that his players can channel that frustration as they take on UIC.

“Losing has to hurt,” Collins said. “If losing doesn’t hurt, then you have real problems.”