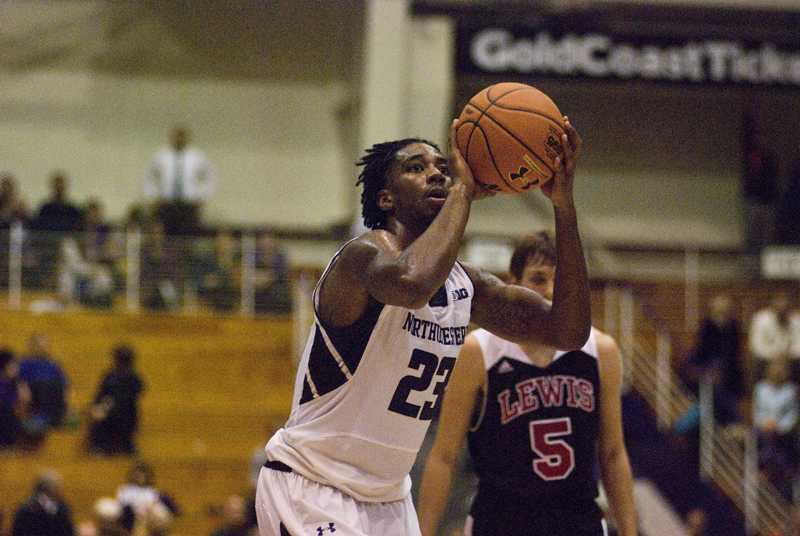 JerShon Cobb shoots a free throw in the Wildcats’ exhibition game against Lewis. The redshirt junior guard led Northwestern with 19 points in the loss to Stanford on Thursday.

Nobody said the Chris Collins era would be perfect.

The bout was close until early in the second half, when a 19-6 Cardinal run put it out of reach.

Stanford forward Josh Huestis, who entered the contest averaging 5.5 points per game, topped the Cardinal with 18 points, including 6-8 second half shooting.

Redshirt junior guard JerShon Cobb was NU’s leading scorer, tallying 14 of his 19 points in the second half.

Forward Drew Crawford carried the Cats early. Five days after scoring 25 points in the season opener, the senior put up 13 in the first half, including a powerful put-back dunk.

But with Crawford as NU’s only productive offensive player, Stanford led 29-27 at the break behind a balanced scoring attack.

The Cardinal pulled away almost immediately in the second half, as the Cats’ offense went ice cold. NU scored 6 points in the first 10 minutes of the period and trailed 48-33 with 10 minutes to play.

“We just can’t have stretches where we don’t score,” Cobb said. “That was a change of the game. It was a 13-1 run, and from there it was tough to get back in the game.”

Cobb’s scoring outburst kept Stanford from extending the lead, but the Cats never again closed the gap to single digits.

Crawford faded after the strong start, shooting 1-7 after halftime. Overall, the Cats shot 38.9 percent from the field and the Cardinal 51.1 percent. NU was 10-28 from behind the arc, relying on 3-pointers almost exclusively in the second half, and only 6-11 from the free throw line.

It was a disappointing shooting performance for a team that scored 72 points on 46.5 percent shooting in its season debut against Eastern Illinois on Saturday.

Redshirt sophomore Tre Demps led the parade of missed shots. The guard was 3-11 on the night — after shooting 0-7 in the Cats’ exhibition game and 1-6 in the opener. Freshman forward Nate Taphorn was 0-4 from the field and junior guard Dave Sobolewski 2-8.

NU’s defense effort was solid for much of the night, and the team limited Stanford guard Chasson Randle, something the Cats stressed before the game.

Randle, who scored a career-high 33 points in Stanford’s loss to Brigham Young on Monday, notched only 14 against NU. But four of the Cardinal’s five starters finished in double figures, with Huestis leading the way.

“Tough loss,” Cobb said. “We’ve got to bounce back Sunday.”