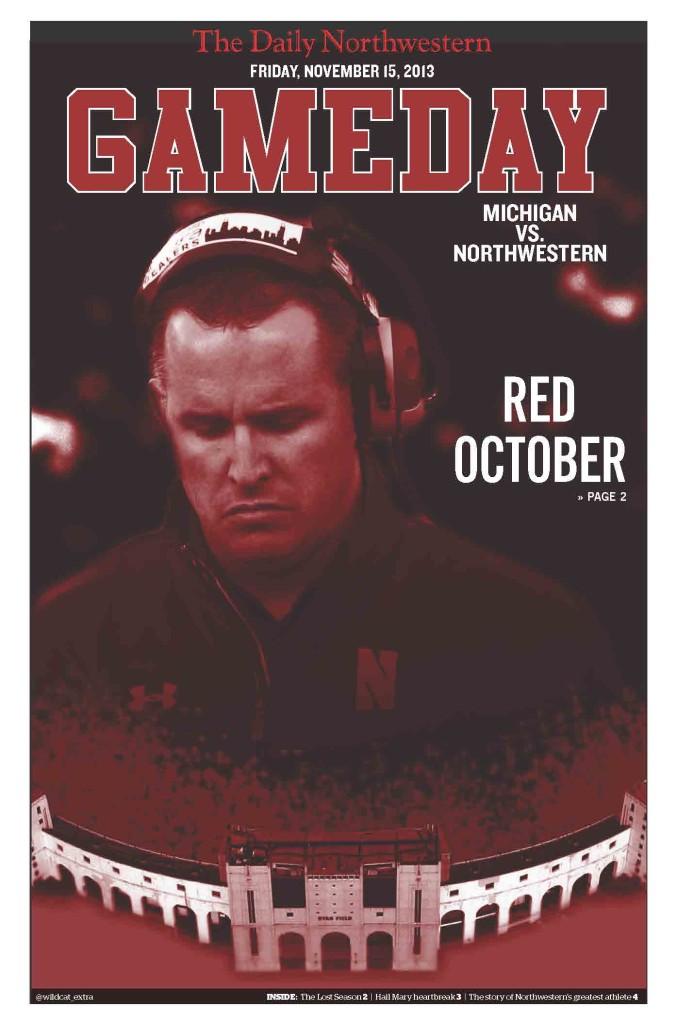 Oct. 4 was a picture-perfect night. Cool fall weather had just set in. Campus was buzzing with a who’s who of alumni in a true Homecoming celebration.

On that night, ESPN’s Mike Greenberg stood on a platform on the luscious green of Deering Meadow, with a purple-stained library behind him, and exclaimed to the crowd, “This is our time.”

The next day, Evanston — not Tuscaloosa, Ala., or Eugene, Ore., as Greenberg eloquently stated – was the center of the college football universe.

It started at 2 a.m., when students packed the shores of Lake Michigan in anticipation of “College GameDay,” and culminated in a matchup between Ohio State and Northwestern, with the Wildcats carrying the lead in the fourth quarter.

The entire nation was watching.

On Nov. 2, NU tried desperately to avoid its fifth-straight loss. The Cats faced Nebraska in Lincoln.

NU clung to a late three-point lead, simply needing to stop one Nebraska Hail Mary to wake up from its nightmare season. Of course, the ball never touched the ground on that play. Instead, it fell into the waiting arms of a receiver in the end zone, as coach Pat Fitzgerald and the rest of the team could only watch helplessly from the sidelines.

Quickly, videos went up on the Internet of the game’s amazing finish. The pass was fodder for sports radio, a highlight for “SportsCenter” and a talking point for all big sports shows the next day.

The entire nation was laughing.

How NU’s season has gotten to this point — irrelevant in the eyes of the country, making headlines for the wrong reasons — of course starts on the field.

Back in that first October game, when Rose Bowl dreams could still be spoken aloud, the Cats quickly fumbled their lead in the final frame, giving way to a 40-30 Ohio State win. The loss marked the fourth-straight time dating back to last season that NU fell in a game during which it led in the last quarter.

The season only went south from there.

The Cats’ next game became a chance at redemption, the beginning of a journey back to a rematch with the Buckeyes in the Big Ten Championship game. Instead, Wisconsin put a shellacking on NU, crushing it 35-6.

Returning home offered no respite, as Minnesota stole a win in Evanston the next week. In Iowa, the team Fitzgerald loves to beat the most, the Cats crumbled in overtime in an effort marred with penalties and turnovers.

And of course, in Lincoln, Neb., NU completed the stomach-punch gauntlet with another harrowing loss on a miracle toss.

“Not at all,” sophomore cornerback Nick VanHoose said when asked if he could have imagined a season like this. “We expected to be maybe the same team compared to last year. We had a great season. Things happen. We’re still the same team that played Ohio State.”

The October swoon is now a seemingly regular occurrence for the Cats. NU is 3-10 during the month over the last three seasons. This year, since the the start of October, in addition to an ignominious 0-5 record, the offense’s point production has been nearly cut in half.

The season has taken a toll on fans as well.

“My expectations were high, I really bought into everything,” said Glenn Geffner (Medill ’90), the radio voice of the Miami Marlins. “That’s what’s made everything since the fourth quarter of the Ohio State game so frustrating. … No matter how much Northwestern has achieved over the last 15, 20 years, there will always be people who look down on us, and it drives me insane. We were right on the verge of turning that corner.”

Of course, the Cats never did turn that corner, instead retreating back toward a time when Geffner was a student, and a bowl game trip meant finals might have to be postponed.

What NU has shown the nation is far from what was expected in Evanston.

It started with injuries, as a slew of key players missed significant time, a bug the Cats have avoided in past seasons due to sheer luck.

Senior quarterback Kain Colter started the season with a concussion and has been dealing with leg issues ever since. The defensive line was robbed of junior Sean McEvilly for most of conference play. And of course, senior running back Venric Mark has only played in one full game, with the team recently revealing Mark fractured his ankle.

“I’d love to go back and be injury-free, but you don’t get that choice,” Fitzgerald said before the Nebraska game. “That’s all that is, is an excuse.”

Off the field, the embarrassments piled up, with NU releasing photos of its special Wounded Warrior uniforms that were roundly criticized, a publicity debacle during a week when the Cats didn’t even play a game.

“Northwestern University and Under Armour have just definitively demonstrated that when you are completely out of touch with your own military, you can make some really horrific gaffes,” Lt. Col. Robert Bateman wrote for Esquire.  “I mean yeah, okay, people want to feel good about ‘supporting the troops,’ and the charity to which money is being donated is, indeed, a worthy one. But in execution, this is pretty disgusting.”

The immediate future for NU is surprisingly bright.

Miraculously, the Cats are favored at home against Michigan on Saturday. Players and coaches have routinely insisted the season was just a play here or there from being everything fans thought it would be.

But the questions about NU’s true place in the Big Ten, if it can really be a contender, remain. From 2008-2011, Fitzgerald’s win totals went from nine, to eight, to seven and then six. This season, the Cats would be lucky to halve their 10-win total from last year.

“It’s easy to be knee-jerk, but I don’t think you can erase all that’s been accomplished by Fitzgerald,” Geffner said. “I can’t think of anybody else I’d rather have running this program. It’s just hard.”

Geffner echoes the general feeling about that the program has the right man at the top. Fitzgerald’s job security is probably the best in the country, and he’s still widely loved by those who follow the team the closest.

But the consequences of this lost season will be felt one way or another, even if it doesn’t mean someone loses their job. Ultimately, NU squandered its best opportunity to prove not to its own fans but to everyone else that this season, things would be different.

Next year will provide another opportunity to earn that respect.

Only some of Evanston will be watching.