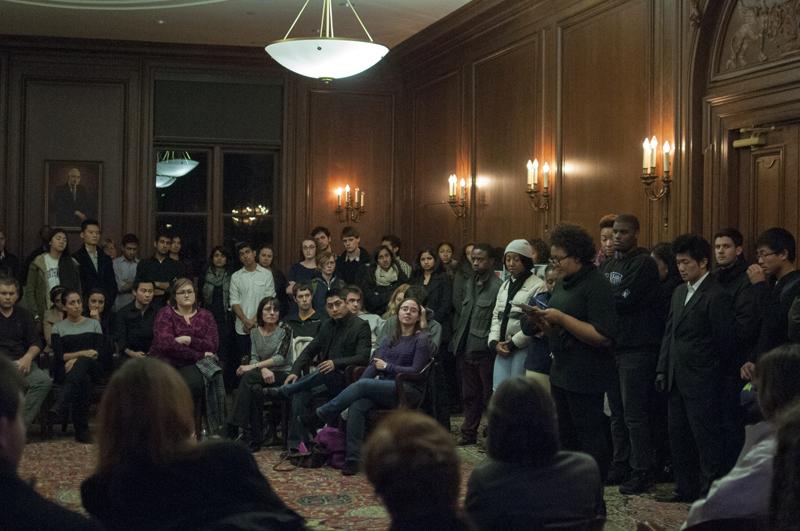 More than 100 people gathered in Harris Hall on Thursday night as deceased former student Alexis Lasker’s friends and classmates spoke about her life, her personality and the impact she had on the Northwestern community.

Dozens of people stood from the crowd to speak at the intimate memorial service, which was organized by Lasker’s close friend Gina Tremmel and boyfriend Amar Mehta, both Weinberg seniors. Some people at the event had been friends with Lasker for years, while others had only known her from brief encounters.

Also in attendance was Dean of Students Todd Adams, who helped Tremmel and Mehta coordinate the event and called the service “beautiful.”

Lasker was found dead Saturday in the 2500 block of West Fitch Avenue in Chicago. The Cook County medical examiner’s office ruled her death a suicide.

Lasker, 22, was on medical leave from the University and was last enrolled as a student in Fall Quarter 2012. She had been studying in the School of Communication with the class of 2014.

On Thursday, Tremmel opened the service with her own memories of meeting and befriending Lasker in their freshman year.

“We were practically inseparable,” she said. “She clearly impacted all of our lives. … It’s great that everyone can be here to help honor her memory.”

Speakers included students who had met Lasker through the International Studies Residential College, the Honors Program in Medical Education, her peer advising group and the pre-orientation program Summer Academic Workshop. They told stories emphasizing Lasker’s kindness and openness, as well as her intelligence and willingness to listen to and help others.

Rohan Zhou-Lee (Bienen ‘13) said he became friends with Lasker after she reached out to him on Facebook over a shared taste in music. He said he and Lasker bonded over discussing works such as the “Les Miserables” film.

“Two years ago we made plans to go see this concert pianist,” Zhou-Lee said. “It fell through, like most times. … I think from now on, that will be a goal of mine to cherish about her, to honor her, to make good on those unfinished plans.”

The night was punctuated with laughter and tears as friends shared both humorous and serious stories. Multiple people brought up Lasker’s smile, which one speaker said “just lit up the room.”

Mehta’s mother, Asha Mehta, spoke several times of her interactions with Lasker through Amar Mehta. Asha Mehta called Lasker a “combination of beauty and brains.” She said Lasker often made it easier for the mother to reach her son, and Lasker enjoyed her cooking.

“Since I heard this news, every time I cook, I miss her,” Asha Mehta said.

Amar Mehta was one of the final speakers. He thanked the attendees for their support and told the story of his relationship with Lasker, beginning with their meeting in the spring of 2012 to his last memories of her.

“I think she liked me because I was a transfer, and I didn’t really know her freshman year that well, or maybe because I was sort of a neophyte here at Northwestern and one of her main qualities that I learned about her very early on was that she liked to care, to show that she loved by imparting knowledge to people,” he said.

He called Lasker “so open, so selfless,” and said despite “rocky” times, their bond was “deeper than any relationship I ever had.”

The last time Amar Mehta saw Lasker was last week, he said. He and Lasker had just seen a pre-screening of a movie with Tremmel and Tremmel’s boyfriend.

“I remember Alexis sitting by my side, I think with her hand around me, just looking so pretty, sort of flirting with me like when we had first met,” he said. “She truly enjoyed that moment. I think she was really happy.”

At the end of the formal portion of the gathering, attendees stayed behind to talk among themselves and write messages to Lasker for her family.

Amar Mehta expressed his appreciation for the number of people who showed up. He told The Daily the many stories indicated that many people who were not necessarily close with Lasker still “felt like they knew her.”

“That spoke volumes,” he said.