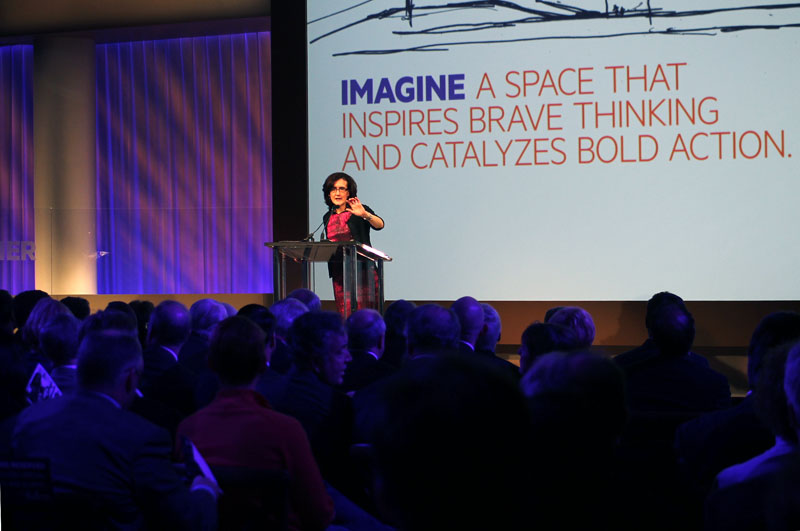 Sally Blount, dean of the Kellogg School of Management, speaks at the groundbreaking ceremony for the business school’s new building. The ceremony was held Thursday evening to celebrate plans for Kellogg’s new global hub.

A groundbreaking ceremony on Thursday unveiled architects’ plans for the Kellogg School of Management’s new building and celebrated the halfway mark in its $350-million Transforming Together campaign.

The ceremony took place near the Allen Center, where the new Kellogg business education center will be located. Attendees watched a video of what the new Kellogg building will look like on the exterior and the interior, and special guests involved in the project symbolically turned the soil to signify the groundbreaking.

“I knew if we were going to do this building, I had to believe in it 100 percent,” Kellogg Dean Sally Blount said. “It’s inspired by the power of the Great Lakes and shows the beauty of the shoreline.”

(New Kellogg building construction expected to start next May, finish by Fall 2016)

The five-story, 410,000 square-foot building will stand where the lakefront parking lot is currently located, next to the Allen Center. It will have a view of Lake Michigan and the Chicago skyline. Construction will start in early 2014 and should finish by late 2016.

In addition to housing Kellogg programs, the new building will include the economics department.

“We’re the only top economics department and top business school that are housed in the same building,” economics Prof. Bill Rogerson said. “That’s one of our unique strengths.”

“It’s going to allow us to move a lot of things around,” Schapiro told The Daily earlier this month. “We’re hoping to have that (Jacobs) as a decent temporary student center when we take Norris offline for two and a half years.”

The University hopes to expand and renovate Norris University Center in about five years and is working with a consulting firm for the plan. Officials unveiled artistic renderings of the project at an Associated Student Government meeting in the spring.

Because many U.S. universities were building new business schools, NU followed their example and decided to improve Kellogg’s facilities, said Gordon Segal, chair of the Northwestern Board of Trustees’ educational properties committee. A design competition was held to recruit a team of architects, who traveled throughout the country for inspiration, visiting organizations such as Google and Pixar.

“We were really in an arms race to get the best students,” Segal said at the groundbreaking.  “We had a lot of inspiration as we tried to mold in our minds how this building would look and feel.”

The building will have exterior glass walls and include classrooms, faculty and administrative offices, community gathering spaces, food service and a two-story 6,600 square-foot conservatory for lectures and dinners.

“I think the new building is awesome,” said Jeremy O’Briant, a second-year student in the full-time Kellogg MBA program who attended the unveiling. “I’m blown away by the design. It’s an exciting time for the school and good for the future. There’s been a lot of buzz about the new building.”

In order to hold the groundbreaking, the Transforming Together campaign, an initiative started in 2008 to improve Kellogg, had to reach the halfway mark of its $350 million goal. So far, $190 million has been raised.

The groundbreaking also marked the transition of the campaign from private to public. Before Thursday, only those closely associated with Kellogg were permitted to donate.

Julie Allen, director of the campaign, said Kellogg hopes to reach its fundraising goal by 2017.

“The campaign has been incredibly successful,” said Allen, the campaign’s director. “We’ve had generous support from alumni and many friends from Kellogg.”

Blount, Segal, Board of Trustees Chair William Osborn and Weinberg Dean Sarah Mangelsdorf, spoke at the ceremony and thanked NU partners, the Kellogg team, architects and donors. Schapiro made closing remarks and a cocktail reception followed.

“It’s great to have a beautiful building and a better space for faculty and students,” said Kathleen Hagerty, chair of the finance department at Kellogg, at the event.  “There were a lot of things that we couldn’t do before, but now we can.”