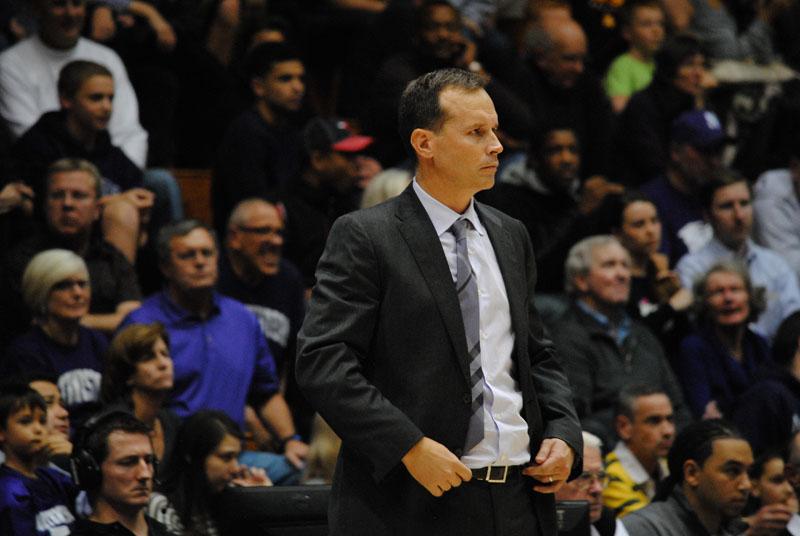 Chris Collins is the latest former Duke assistant to take a head coaching job. He’ll look to mirror the success of Mike Krzyzewski proteges at other schools.

As Northwestern takes on Stanford on Thursday night, college basketball fans everywhere will bear witness to an increasingly familiar sight: one former Duke assistant coaching against another.

Wildcat coach Chris Collins, who played for the Blue Devils from 1992-96 and coached there from 2000-13, will square off against the Cardinal’s Johnny Dawkins, who also played for Duke from 1982-1986 then coached for from 1998-2008, respectively. Both coaches are descended from the lineage of current Duke coach Mike Krzyzewski, one of the greatest college basketball coaches ever, whose pedigree is only padded by his impressive coaching tree. Former Blue Devils assistants Dawkins, Tommy Amaker and Mike Brey have all left the tutelage of Krzyzewski to lead successful programs at other schools, and NU hopes to be next in line.

Dawkins had an illustrious career as a player at Duke, becoming the team’s all-time leading scorer by the time he graduated, and after a stint in the pros returned to his alma mater to become an assistant under Coach K in 1998. Although Stanford’s program has improved since he took the head coaching job, the team still has a long way to go. Despite guiding the Cardinal to a 94-74 record in five seasons, Dawkins has yet to crack the NCAA Tournament field. His only postseason of note was in 2012, when Stanford won the NIT.

Still, Dawkins has his team on the cusp of recognition. The Cardinal was listed among others receiving votes in the preseason Associated Press Top 25 poll, a superlative likely to earn Dawkins his first NCAA Tournament berth if Stanford can maintain that stature throughout the season.

Amaker was on the Duke roster for three seasons with Dawkins, playing for the Blue Devils from 1983-87. His time as an assistant began immediately after his playing days and lasted until 1997, when Amaker took his first head coaching job at Seton Hall. In four seasons there, he guided the Pirates to a 68-55 record and one NCAA Tournament appearance.

In 2001, Amaker took over a tumultuous Michigan program, where he faced Duke and Krzyzewski in only his seventh game on the sideline.

“It was a nightmare,” Amaker said about the experience.

The Wolverines struggled to recover from NCAA sanctions imposed in the wake of a money laundering scandal and in six years under Amaker’s leadership never made the NCAA Tournament. Amaker left for Harvard in 2007 and has been steadily building a program since. After not making the postseason in his first two years, the Crimson made the CIT in 2010 and the NIT in 2011 and has been in the NCAA Tournament the past two seasons.

“It’s always a challenge to create the culture and identity that you believe in,” Amaker said on moving to a new school.

Brey, who currently coaches at Notre Dame and coached at Duke from 1987-95, is the most successful of Coach K’s former assistants. He took the helm for the Irish in 2000 after a brief stint at Delaware. No stranger to competing against someone he used to coach with, Brey has matched up against his mentor multiple times in his career.

“(I) actually played against Duke twice,” Brey said, “once when I was at Delaware and once in the NCAA Tournament with Notre Dame, and lost both of them. It was a little distracting back then.”

Despite a couple of hiccups against the Blue Devils, Brey has compiled an impressive coaching resume. He amassed a 99-52 record at Delaware and led the Blue Hens to two NCAA Tournament appearances. Since he started at Notre Dame, Brey has added another 285 wins and nine NCAA Tournament bids. He credits Krzyzewski with much of his success.

“Coach K had a great influence on me,” Brey said. “I’ll always be thankful he hired me when I was an assistant high school coach and really trained me to be a head coach. I draw on my experiences with him every day as a head coach now at Notre Dame.”

The 26-year college coaching veteran also had some advice for Collins.

“I think to establish yourself,” Brey said, “you’ve got to find your personality as a coach. You do have to be yourself. You draw from all the influences you’ve had and come up with your own style.”

It’s hard to predict what the future holds for Collins and NU’s squad. Only time will tell, as Dawkins, Amaker and Brey all needed several years at their respective programs to find sustained success. However, it is worth noting that the trio of Krzyzewski proteges found their eventual homes at schools very similar to Duke.

“I think it’s kinda funny we’re all at academic-oriented schools,” Collins said. “You have Johnny at Stanford, Tommy Amaker at Harvard, Mike Brey at Notre Dame, myself at Northwestern. I think we’ve all found a similar niche of school that we loved about being at a place like Duke. That’s the main similarity of all of us.”