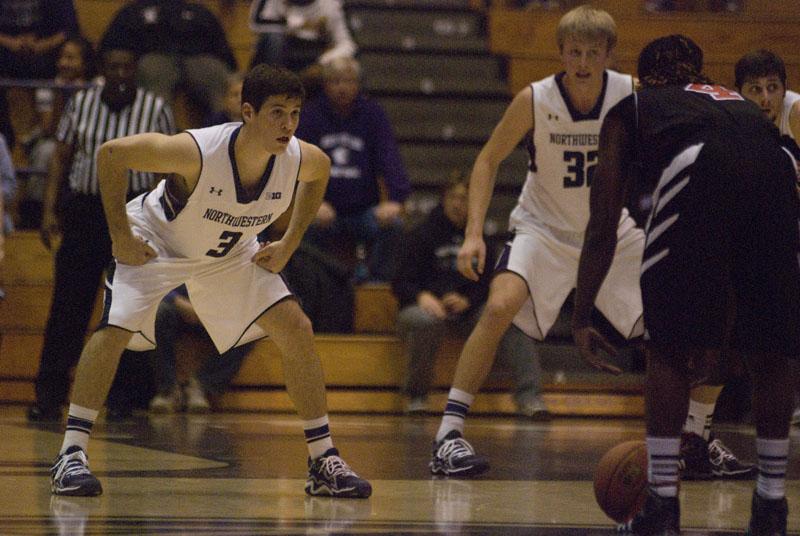 Junior guard Dave Sobolewski will be part of an NU effort to slow Chasson Randle and the Cardinal, who scored 103 points in a loss to BYU on Monday. “We’re really taking pride on the defensive end,” Sobolewski said.

As basketball programs and schools, Stanford and Northwestern are so similar that Kale Abrahamson could barely choose between them.

Two years ago, the forward from Iowa narrowed his college decision to the Cardinal and the Wildcats, then chose NU because — well, he doesn’t really remember.

“It just came down to — I don’t know. I don’t really know what I decided back then,” the sophomore said Tuesday.

The teams play in Palo Alto on Thursday, the second straight year the academic powerhouses will meet on the hardwood. Stanford (1-1) beat NU (1-0) 70-68 when the Cats hosted last season.

The Cardinal enters this year’s rematch coming off a 112-103 loss to Brigham Young on Monday. The Cats, who take pride in their ability to limit opponent scoring, don’t plan on replicating the shootout.

“We watched it,” junior guard Dave Sobolewski said. “I don’t think we’ll try to play the game in the hundreds on Thursday. … The staple of our team is defense. We’re really taking pride on the defensive end, so we’re going to try to definitely try to hold them way below what they scored (against Brigham Young).”

Stanford guard Chasson Randle dropped 33 points in the high-scoring loss to the Cougars. The junior also scored 37 in the Cardinal’s exhibition game and 18 in the season opener, after averaging 13.6 points a game last season.

Collins emphasized team defense as the key to neutralizing Randle, suggesting no individual guard is up for the task alone. He said help defense will be important, and he won’t rule out switching to zone if necessary.

“With a really good player, you’re not going to shut him out,” Collins said. “For us it’s, ‘Let’s try to make him make tough shots, keep him off the free throw line and eliminate his layups in transition.’”

NU, which allowed 46 points in its exhibition game and 55 in its opener, will have to slow the pace to beat Stanford on Thursday.

Though the Cats and Cardinal don’t play at the same tempo, they have many other things common.

As schools, they have similar academic reputations. As programs, they have had comparable levels of success in recent years. And as teams they are led by coaches with parallel resumes, as NU coach Chris Collins and Stanford coach Johnny Dawkins both played and then coached at Duke.

It makes sense, then, that there’s a degree of rivalry between the two outfits, both on the court and on the recruiting trail.

“Both the schools are going to target guys that value academics and athletics,” Collins said. “If you look at a lot of the lists of guys that we’re recruiting, (Stanford is) usually on the list as well.”

Stanford targeted Abrahamson early, the sophomore said, and the idea of playing for a Duke assistant appealed to the lifetime Blue Devils fan, but he chose NU nonetheless. On Tuesday, a few minutes after saying he didn’t remember his reasons, Abrahamson recalled some of the thought process.

“Obviously they’re both world-class institutions,” Abrahamson said. “Stanford was farther away than here, which probably played a little into it, but other than that I just looked at basketball because I knew the schools were pretty much a give-and-take. Stanford’s great, and Northwestern is great.”

Wednesday will, for the moment at least, decide who is greater.