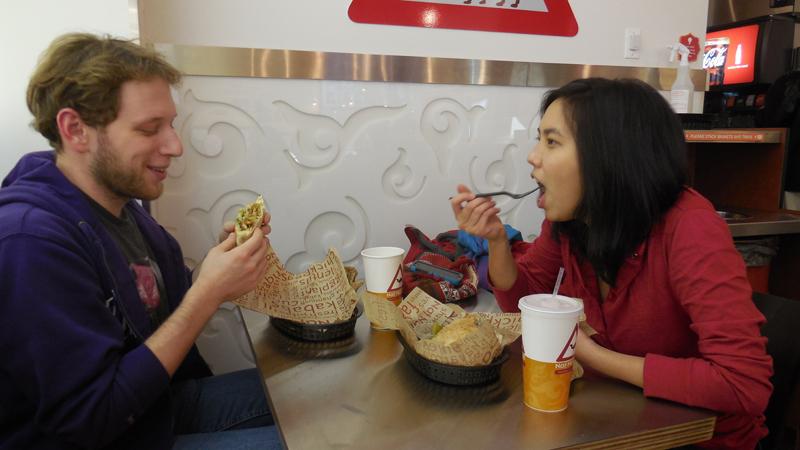 Although Naf Naf Grill, 1629 Orrington Ave., opened its doors for the first time in Evanston, the casual chain has seven other Chicago-area locations. However, this is its first near a university.

“When we were thinking about the growth plan of Naf Naf, we felt the concept went great with a college campus,” said co-owner David Sloan, who is originally from Chicago.

The grill is a new neighbor to JT’s Bar and Grill, whose owner thinks the new grub spot will increase foot traffic in that area.

“I think the more businesses that open on this street, the better it is for everybody,” said Sherrie Vidinich, owner of JT’s.

Naf Naf Grill provided the free pita sandwiches from 11 a.m. to 3 p.m. on its first day.

“We had a line about a block long, which is pretty impressive since it is so cold,” Sloan said.

The first time that SESP senior Priscilla Liu went to Naf Naf Grill was almost four years ago at its first-ever store in Naperville, Ill.

“I have been with Naf Naf since the beginning,” Liu said. “In the past three to four years, they exploded.”

Liu, who described the food as “good and delicious” and was “very excited” that a Naf Naf Grill opened in Evanston, said she planned to bike with a friend to the store after her class in Annenberg Hall ended at about 2 p.m.

“We got here in seven minutes,” her friend, McCormick junior Noah Conley, added.

Liu and Conley both traveled on a summer trip to the Middle East with Campus Crusade for Christ, a Christian student group at Northwestern.

“I’m happy to have the food again,” said Liu, as she took a bite out of her steak shawarma pita sandwich.

Naf Naf Grill’s head chef, Sahar Sander, said he did not feel overwhelmed by the crowds, but he was happy to serve so many customers.

“It went very well — well above our expectations,” said Sander, who is also a co-owner and originally from Israel. “We came very prepared.”

In addition to the Evanston location, the chain plans to open six more stores in the Chicago area, including one in Mount Prospect.