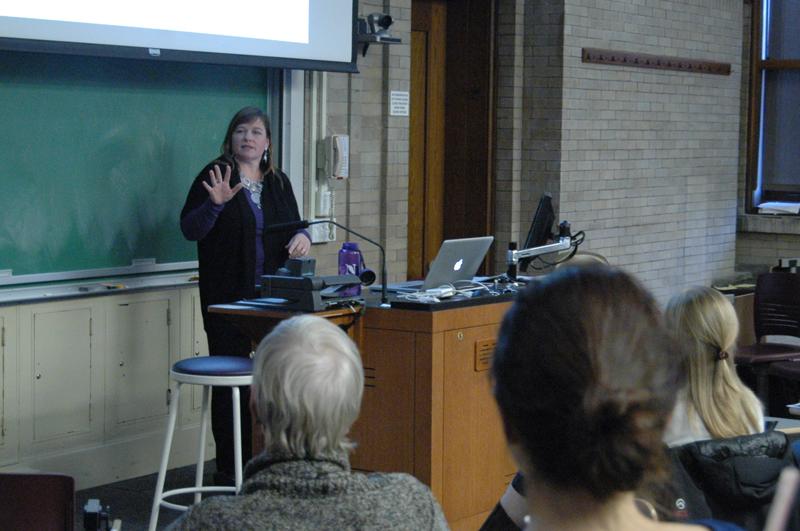 Prof. Sara Broaders of the Department of Psychology gives her ResTalk on lifehacks in Swift Hall on Saturday, Nov. 9. The event featured three other professors that lectured on a variety of topics, from the U.S. economy’s national debt to the study of electronics in the classroom.

Although the scene lacked the trademark black background and the speeches won’t go viral on YouTube, students stumbling across Swift Hall on Saturday would be forgiven if they thought they were at a TED Talk.

About 60 students filled a classroom for the Residential College Board’s second annual ResTalks event. Ranging from the personal — psychology Prof. Sara Broaders’ talk on lifehacks — to the political —  Feinberg Prof. Phil Hockberger’s speech on how we should view the national debt  — Northwestern professors delivered 20-minute anecdotes in the style of the popular conference series.

Astronomy and physics Prof. Michael Smutko, the associate master of Ayers College of Commerce and Industry, kicked off the event with a talk on the topic most relevant to students: whether laptop use in class impacts performance.

Smutko, who has been researching the topic since 2009 with data from NU students, presented his findings, which show that performance decreases for students who are off task or multitasking. He said the use of technology is ultimately a matter of personal responsibility and could make the difference between career success and failure.

Broaders, a CCI master, discussed three things that help students prepare for tests: sleeping, eating and working out. She also noted one that doesn’t: cramming.

Broaders deemphasized the impact of money on long-term happiness, saying even lottery winners have been shown to fall back to average levels of happiness a year after winning. Instead, Broaders advised students to do two things: find a job you love and find a partner you love and respect.

“The first is just to expose our residents to a wide array of interesting and widely accessible topics, and the second is to increase fellow-student interaction and really show them some of the cool topics their fellows can expose them to,” the Weinberg junior said.

Stoughton said the group solicited nominations from residential college residents of professors they would like to see speak at the event.

Smutko’s final piece of advice? Don’t sit behind someone with a laptop.

“If somebody’s watching that cat video in the front row, everyone behind them is watching it too,” he said.