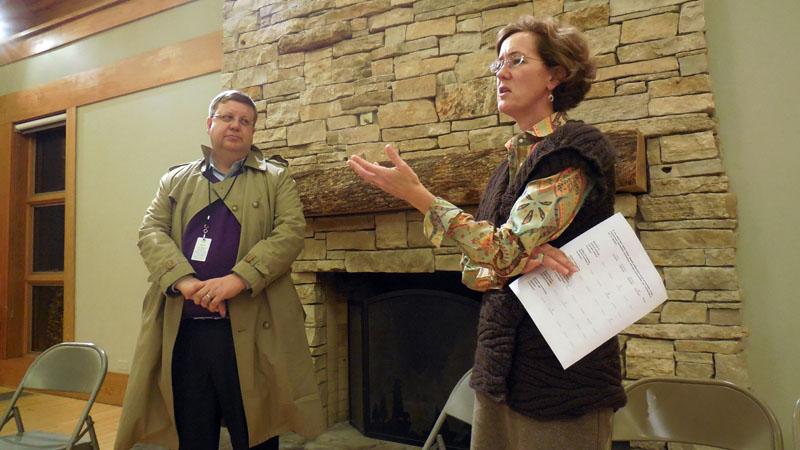 Ald. Jane Grover (7th) on Thursday night discussed a wide range of issues with her constituents, including the Harley Clarke Mansion and police surveillance.

More than 15 residents came to the meeting, which was held at the Evanston Ecology Center, 2024 McCormick Blvd. Grover recruited various city officials to help answer the audience’s questions.

Grover addressed the future of the city-owned mansion, 2603 Sheridan Road, which sits on the lakefront in her ward. City officials have said it needs at least hundreds of thousands of dollars in various repairs, especially if its current tenant, the Evanston Art Center, plans to stay in it.

But Grover told her constituents the art center is reconsidering its interest in remaining in the mansion, citing the “extraordinary cost for renovation.” She and city manager Wally Bobkiewicz promised officials would reach a resolution in regard to the property.

“We will resolve the issues with Harley Clarke,” Bobkiewicz said.

In addition to the city manager, a police officer from the Evanston Police Department’s Problem Solving Team appeared at the meeting to share crime data with the residents. Officer Scott Sengenberger said burglaries and vehicle burglaries have decreased in the ward, while assaults and batteries have increased from last year.

EPD recently acquired a repurposed Brinks truck, which it equipped with surveillance equipment. Sengenberger called the new vehicle “a great deterrent for crime.”

“We have to work really hard with the Problem Solving Team to make sure that the property is safe, that the community is safe,” Caneva said.

The first step the city takes to filling a vacant property is registering it. Caneva asked residents to call 311, a call center and online support center for residents, if they know of or suspect a vacant property.

Grover said she was pleased with her constituents’ participation in the meeting.

“I just try to do a couple of ward meetings a year to have an in-person discussion with residents,” Grover told The Daily afterward. She said she likes the “face-to-face” meetings.

“I just want to get a sense of what is going on in the community, and this is a good way to do it,” Schapiro said.

Grover plans to hold her next ward meeting in January or February, when she will host what she called “Evanston MythBusters.”