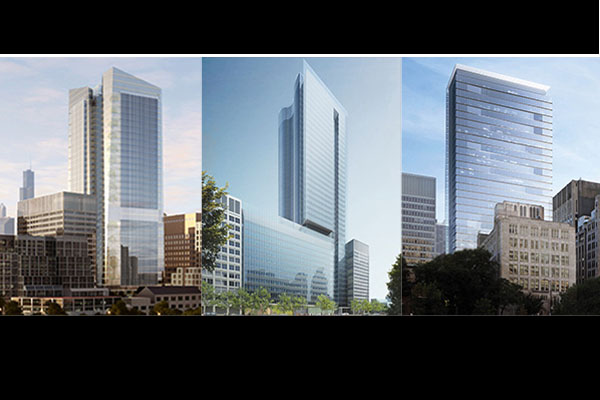 The three finalists in the design competition for the Chicago campus Biomedical Research Building are Goettsch Partners and Ballinger, Perkins+Will and Adrian Smith + Gordon Gill Architecture and Payette. The Board of Trustees will choose a design this year.

Northwestern this morning released three potential designs for the biomedical research building that will replace the old Prentice Women’s Hospital on the Chicago campus.

The architect’s renderings, floor plans and models can be viewed today through Tuesday in the lobby of the Robert H. Lurie Medical Research Center, where anyone can fill out a comment card. The materials are also available on the NU website.

The NU Board of Trustees expects to make its final choice later this year, according to the University.

Eugene Sunshine, NU senior vice president for business and finance, said the University is weighing the three submissions with a “great deal of input.” He added NU will consider the campus, the Streeterville neighborhood and Chicago at large as it picks the winning concept.

In June, the trustees selected three teams of architects to come up with possible designs for the research facility: Goettsch Partners of Chicago and Ballinger of Philadelphia, Perkins + Will of Chicago, and Adrian Smith + Gordon Gill Architecture of Chicago and Payette of Boston.

NU started the demolition process of the old Prentice hospital in March, ending a nearly two-year battle with Chicago preservationists over the cloverleaf-shaped building designed by famous architect Bertrand Goldberg. That did not stop an anti-Prentice destruction banner from being flown over NU’s commencement ceremony in June, a mysterious move the University called “disappointing.”