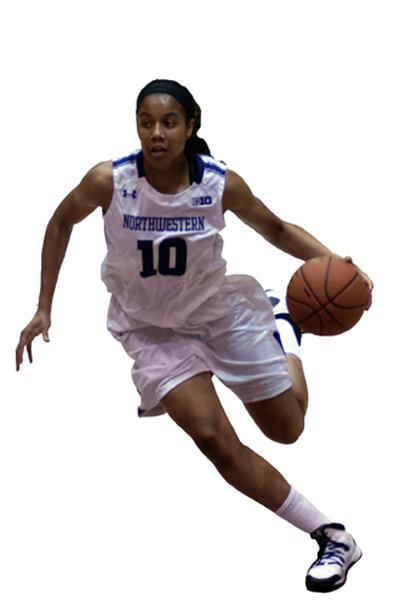 To say Karly Roser isn’t the loudest person in the world would be an understatement.

The soft-spoken junior point guard has become a de-facto leader on the court because she has the ball in her hands so often. However, Roser is now a captain and one of just four upperclassmen on the roster, so her leadership will be tested off the court as well.

“I’m still working on being more vocal, but it does help that I have my three other upperclassmen,” Roser said at Northwestern’s Media Day in October. “Everyone takes responsibility for themselves and makes other people accountable, so I think anyone can be a leader on this team.”

NU will be one of the youngest teams in the Big Ten this season, but the squad’s underclassmen are very talented. Reigning Big Ten Freshman of the Year Maggie Lyon returns, and the four-person freshman class includes Nia Coffey, a McDonald’s All-American and a member of the 2013 USA team that won a gold medal at the FIBA U19 World Championships.

Early returns from the newcomers have been positive both from the coaching staff and teammates.

“They have amazing attitudes, which is a really good thing because you can’t fix attitude,” Lyon said. “They work hard, they want to win, they take criticism well … they’re great players and they’re really athletic.”

After a sensational freshman campaign, the pressure of a sophomore slump does not faze Lyon. She said she’s tried to improve her defense in the offseason and has worked on being more aggressive on the attack and finishing with contact at the rim. She said the only pressure she faces is whatever she places on herself, but she is only worried about this year and doing whatever she can to help this year’s squad.

“There could be pressure if I put it on myself, but I’m just trying to not think like that,” Lyon said. “It’s a new season. Whatever I did last year is what I did last year, and I just have to prove myself again this year and help the team out in whatever way I can.”

NU will have to replace two key members of its frontcourt from a year ago in Kendall Hackney and Dannielle Diamant. Lyon said the team may fill the void in other areas, including using more of its athleticism. Roser said it will also open more offensive options, which may include bypassing the post entirely.

Coach Joe McKeown points to junior Alex Cohen, who at 6 foot 5 is the likely choice at center, and Coffey as potential replacements in the frontcourt with sophomore Lauren Douglas also providing some depth.

Turnovers were a struggle for last season for NU, which finished 11th in the Big Ten with a -2.77 turnover margin per game. The Cats were slightly better in rebounding, coming in 10th with a -0.8 rebounding margin despite placing fourth in the conference with 38.6 rebounds per game.

These are the two areas McKeown harped on after NU’s win over Lewis in Wednesday’s exhibition game. The Cats out-rebounded the Flyers 52-43 and only turned the ball over 12 times compared to Lewis’ 18. However, the coach was adamant his team must be better if NU will see success in the competitive Big Ten Conference.

“Turnovers and rebounding, if we aspire to be a great team, they’re the things we got to get better at,” McKeown said after the Cats’ win over Lewis. “It’s pretty cut and dry when you look at the Big Ten and the talent in our league and how deep are league is. We got to take care of the basketball.”