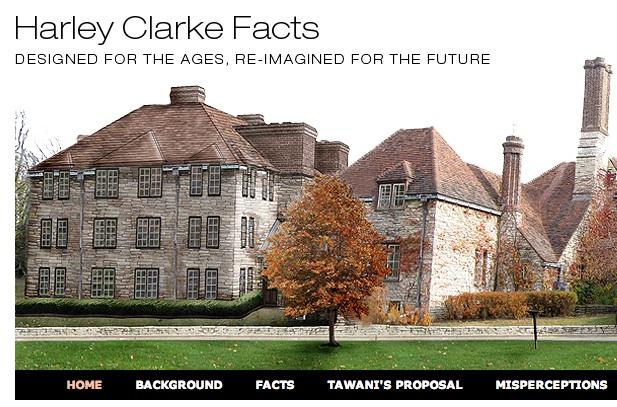 Tawani Enterprises, an investment group led by Evanston billionaire Jennifer Pritzker, unveiled a new website Thursday to set the record straight on her controversial bid for the Harley Clarke Mansion.

The website, www.harleyclarkefacts.com, pushes back on several points of contention surrounding Pritzker’s proposal to turn the landmark building into a boutique hotel. City Council rejected the $1.2 million plan this summer after vocal opposition from residents who claimed it would compromise Evanston’s commitment to its lakefront and public parkland.

Pritzker’s proposal would have brought about $5.1 million a year to Evanston and created 54 full-time jobs, according to Tawani, citing an economic and fiscal impact study from international hospitality consulting firm HVS. The study also found the plan would have generated $523,600 in new city tax revenue each year.

Asked about the website an hour after it went live, city manager Wally Bobkiewicz said Evanston appreciated Tawani’s interest in the mansion but declined to comment further.

A person close to Pritzker’s proposal said the billionaire herself came up with the idea for the website, hoping to provide the information for anyone interested in the mansion in the future.

The website says Tawani never planned to buy or prohibit access to Lighthouse Beach, which is adjacent to the landmark mansion. Instead, the group wanted to add public parking for the beach and build a drop-off area for both hotel guests and the public, according to the website.

“Our plan was to ENHANCE beach access for the public,” the website says. “Our plan did include access to the beach for hotel patrons, but NOT at the exclusion of the public.”

The website also details for the first time a battery of tests and reports on the condition of the lakefront property. Citing the results, Tawani says Pritzker did not anticipate making any immediate profit on the dilapidated mansion, a conclusion also reached by two parties that expressed interest in the property but never submitted bids.

Tawani claims its evaluations found “significant environmental liabilities” with the property, including elevated levels of radon, asbestos and lead in paint. The website calls the building’s ventilation “unacceptable” and plumbing “woefully inadequate.”

While noting Tawani has dedicated itself to preserving historic buildings, the website concludes the decorative elements of the mansion are “severely damaged beyond repair,” if not entirely missing. Pritzker was willing to spend $22 million to restore the mansion.

The website also seeks to clarify the bidding process, which was plagued by intense speculation about what the city and Tawani were doing behind closed doors. This summer, Mayor Elizabeth Tisdahl admitted she and another person encouraged Pritzker to toss her hat in the ring, though Tisdahl never named the other person. Tawani claims Tisdahl, Ald. Judy Fiske (1st) and “others” approached Pritzker about turning the mansion into a bed-and-breakfast, an idea Pritzker ruled out after gauging the state of the property.

Fiske said Friday a bed-and-breakfast was “part of the discussion” she and other aldermen had with Tawani about the mansion, though she could not recall the conversation with Pritzker as described on the website.

The website’s launch comes as city officials continue to weigh the fate of the mansion and its longtime tenant, the Evanston Art Center. The art center rents the building from the city for $1 year, an arrangement meant to boost the Evanston art scene.

However, the city heard for the first time last month that the Illinois Department of Natural Resources is interested in the mansion, adding a new obstacle to the center’s plan to stay in the building and work with the city to repair it.