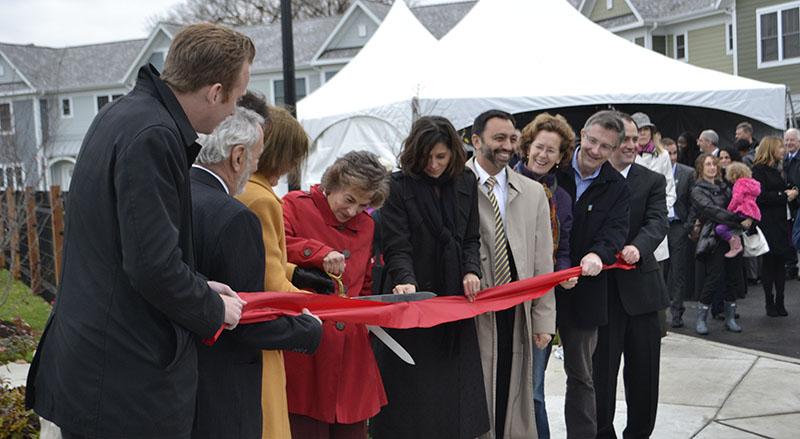 Rep. Jan Schakowsky (D-Evanston) and other city, state and federal officials cut the ribbon in front of Emerson Square Apartments. More than 50 people gathered for the official opening of the new affordable housing complexes.

It was a cold Wednesday afternoon when 57-year-old Karen Evans sat among her friends in front of new west Evanston affordable housing apartments.

“I was here when it was a blighted place, and it was hard to imagine what a wonderful place we’d have today,” U.S. Rep. Jan Schakowsky (D-Ill.) said to a crowd of more than 50 people.

Brinshore Development partnered with the nonprofit Clearbrook, Inc. to develop the housing.

The 32-unit mix of town homes and walk-up apartments, which opened in July, targeted households of different income levels. Four of the units are dedicated to “extremely low-income” residents with disabilities or special needs, according to a news release.

An $18.15 million grant from the federal government made the development possible. The money received through Neighborhood Stabilization Program 2 is the city’s largest housing grant ever.

Annie Harris, an 85-year-old Evanston retiree, said she came from the nearby Fleetwood-Jourdain Community Center.

“It seems like it’s wonderful,” she said. “I will go in and look myself.”

The development, a new park and a community garden connected neighborhoods that were once separated by a vacated railroad right of way and old manufacturing buildings. Todd Lieberman of Brinshore Development said this project was “many years in the making.”

Evanston Mayor Elizabeth Tisdahl expressed gratitude for those involved in the project. She especially praised Brinshore, which worked with the city from completing the grant application to constructing the buildings.