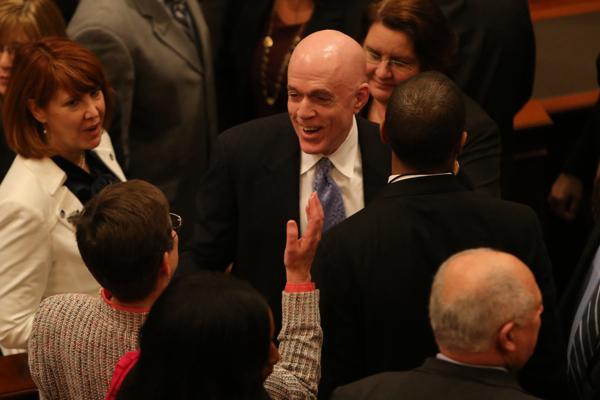 State Rep. Greg Harris (D-Chicago) celebrates after the Illinois General Assembly voted Tuesday to legalize same-sex marriage in the state. Harris was a sponsor of the bill.

In a surprise move, the state House took up the bill Tuesday afternoon, voting 61-54 in favor of its passage. The state Senate, which first passed the Religious Freedom and Marriage Fairness Act in February, voted later Tuesday to pass the House’s amended version. Illinois Gov. Pat Quinn (D) has pledged to sign the legislation.

Illinois will become the third most populous state to legalize same-sex marriage, behind only California and New York. The bill will go into effect June 1, 2014, supplementing the state’s current civil union law, which passed in 2011.

Local supporters of the law quickly shared their positive reactions to the news. State Sen. Daniel Biss (D-Evanston), perhaps at a loss for words, posted a sequence of 61 exclamation points on Twitter.

“I am ecstatic that the Illinois General Assembly has followed the Illinois State Senate and passed SB 10, the Religious Freedom and Marriage Fairness Act this afternoon,” Rep. Jan Schakowsky (D-Evanston) said in a statement. “Every citizen of our state and our nation deserves equal treatment under the law, and SB 10 will assure that every committed couple in Illinois enjoys the same protections and benefits.”

Schakowsky pledged to continue her fight for lesbian, gay, bisexual and transgender rights in Washington, D.C., where the U.S. Senate is expected to take up the Employment Non-Discrimination Act for a final vote Wednesday. The legislation would prohibit employment discrimination based on sexual orientation or gender identity.

Weinberg sophomore Kevin Cheng, College Democrats’ vice president of programming, said he found out during a class the House had passed the bill and was “ecstatic” with the result.

“I didn’t focus for the rest of the class,” Cheng said. “It was just like that was all I cared about.”

The group has been hosting phone banks with Equality Illinois since April to advocate for the issue.

“It’s a really big feeling of fulfillment because we put in so much work for this. We focused so much of our energy on this for the last six months, and just to see it actually happen and to see that we played a role in that was just amazing,” Cheng said. “I’m so impressed and so proud.”

The campaign for same-sex marriage in Illinois attracted national attention — especially after a failed attempt at passage in the House in late May — including the endorsement of President Barack Obama, a Chicago native.

“Michelle and I are overjoyed for all the committed couples in Illinois whose love will now be as legal as ours — and for their friends and family who have long wanted nothing more than to see their loved ones treated fairly and equally under the law,” Obama said in a statement following the vote.

“Today is a critical moment in history for Illinois and for the entire LGBT movement,” Emanuel said in a statement. “Finally, gays and lesbians across our state are guaranteed the fundamental right to marry, and countless couples with children will be acknowledged for what they are under the law — families just like everyone else.”