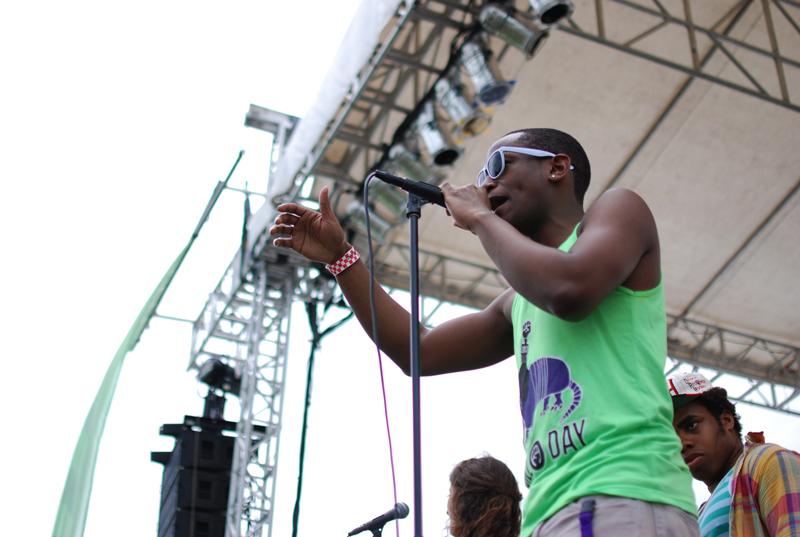 Medill-Bienen sophomore Thaddeus Tukes became involved with his two most visible roles at Northwestern in an unusual way — at the last minute.

As someone who joined Battle of the Bands-winning musical group Juc E Frut just two months before it earned a spot in the Dillo Day lineup, Tukes tends to dive right into his biggest commitments. The trend continued when he applied for his latest role on campus, Associate Student Government’s associate vice president of diversity and inclusion, the night before the application was due.

“I’m out of my comfort zone in this position,” Tukes said. “But I’m not going to learn unless I force myself to be uncomfortable at first in order to adapt and learn and figure out how to help people in other spaces that aren’t my space. That’s why I wanted this position.”

Tukes is no stranger to leadership. He currently serves as the opinion editor for Pulse magazine and as secretary of the NU chapter of the National Association of Black Journalists, in addition to performing in several bands.

The dual degree student said he plays too many percussion instruments to name, as well as piano, guitar and bass, but said his favorite is the jazz vibraphone. For two years, he was ranked as the No. 1 jazz vibraphonist in Illinois while in high school.

Tukes has continued to be recognized for his vibraphone playing at NU. He said he was asked to join Juc E Frut after one of his friends in the band heard him play at a jazz concert.

Tukes now participates in several jazz groups and with his own “hip-hop, rap, soul, jazz, everything band” Syndicate 119, which has played at venues on campus and around Evanston, including the downtown Evanston club 27 Live, 1012 Church St. Out of all his musical experiences at NU, he said performing at Dillo Day was one of the most exciting.

“It’s always really nice to perform for your peers, especially in a non-formal setting,” he said. “You really get a lot of energy from the audience, and then it mixes with your energy from just performing. … That’s probably one of my fondest memories of freshman year, playing at Dillo Day.”

Tukes said he plays mostly jazz music, a genre he was drawn to because of its use of improvisation.

“Jazz to me is the most expressive type of music,” he said. “It allows you to compose instantaneously as like your base idea, but then you get to take that and rewrite the story.”

The Chicago native said he chose NU because it has allowed him to study both jazz and journalism and because of the financial aid the school was able to provide him. He is currently the only student at the school who studies both majors.

In the “short term,” Tukes says he wants to write for The New York Times’ arts and culture section and play for Jazz at Lincoln Center in the venue’s big band. Eventually, he hopes to own a “mass-media conglomerate.”

“It’s the same four or five people of the same demographic that own all of the media in America,” he said. “There needs to be another voice. Hopefully I can be one of the many people that presents that other voice.”

After two failed attempts to fill the position that remained vacant for almost five months, ASG unanimously confirmed Tukes to its top diversity position last week. His appointment was met with enthusiasm from senators and members of ASG’s executive board.

“I think he’s fantastic,” student life vice president Anna Kottenstette, a Communication senior and former Daily staffer, told The Daily last week. “The way that he spoke and the way that he made everyone believe in what he was saying, we thought would be incredibly important for this position and really contagious on campus.”

Tukes said success in his new role will hinge on his ability to convince people to leave their comfort zones.